There are certain activities that most people agree are not and likely never will be fun. Root canals, for example, are universally despised by the poor souls who have to shell out the money to fix their now fully broken tooth. In that vein, waking up in the morning has never really been considered a fun activity by the average person. Thankfully, someone came up with the fantastic idea of giving you something to do when you first wake up, such as destroying alien invaders hell-bent on destroying Earth. I can’t think of a better way to start the day than with this Alien Hunt Alarm Clock. 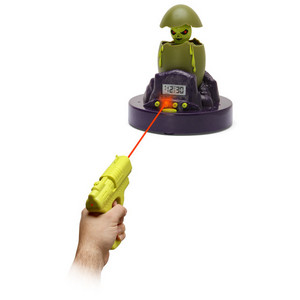 Have you ever watched a James Bond movie where he seems to emerge inexplicably from a deep sleep to take on the assassin that’s about to smother him? Now you can harness those reflexes! When the alarm is set, the little green egg will remain closed, just biding his time until the morning, When the sun comes up, the alien will pop out with flashing red eyes and cackle at you until you get your wits, at which point you can blast him back into the stone age with your included laser pistol. After that, it is time for a coffee cake and a nap. At a price of $18.99 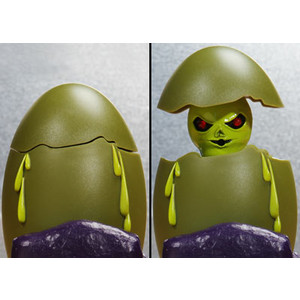 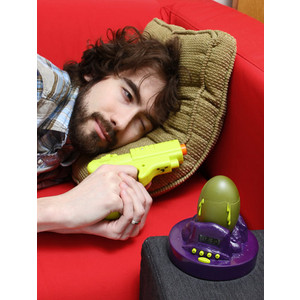 Ok, so maybe waking up to an alien invasion might not be your style. If that is the case, you can check out some of the other great clocks featured here on Gadgethim. A sports fan might better appreciate this Play by Play announcing scoreboard, for example. There is also this cool retro flip down clock if you want to live in the 50s’ again. I can’t think of a reason you would want to go back to a time before the Internet, but the option is open to you at least.