There have been many weird and bizarre mods of Apple and their products. The secret behind all the weirdness and bizarreness lies in the fact that most Apple products are very simple and minimalist and hence people just have to alter them and make them look complicated! 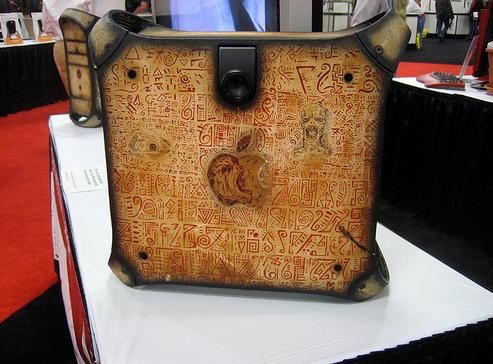 Here is a cool Apple G4 Case Mod by UltraClay which comes with weird hieroglyphics or one of those ancient letters. The characters on the case remind me of Sumerian cultures or one of the Euphretic civilizations. The center of the case also features a burned out Apple logo with a ghoulish face in the inset. On a closer look, the case mod resembles a bizarre file or eve a container used to pour some ancient liquid.

While it just beats me what the original story behind the case mod might be, this has to be one of the coolest G4 mods I have ever come across. Imagine working on a computer that looks like that! You would certainly have to find a similar or matching monitor in order to do justice to this G4 mod. Here is another cool Apple Power Mac G4 Mod which was actually turned into a Bike. I would say, G4 is one of the coolest products that Apple has ever released and all these mods only show its popularity around the world.