Now, even though the picture contains the letter of a bank employee penning down his resignation letter where he forcefully takes away the bank’s courtesy pen, the caption on the box of this mimicry a bank’s courtesy pen would definitely appear to be sympathetic words directed towards a bank robber who, at the last moment suffered from a case of cold feet and just decided to snag the pen instead of the cash. 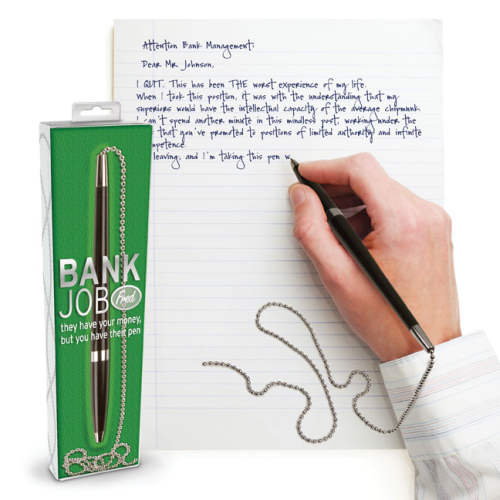 The Fred designers have obviously gone ahead and stereotyped  the bank pen in this creation which is colored in the evergreen business black and comes equipped with the traditional twisting barrel mechanism to extend or retract the tip. Coming back to the thief’s scenario, when he opens the box he’ll find that it comes stuffed with flocking stained to the color of money(green) hence acting either as some form of subconscious consolation or as something just put there to make him feel worse.

All in all the pen itself looks cool but could not be classified as anything more than a parody and as for the thief maybe riding this Black Jaguar to his next job would result in a better outcome.