Conversations over a cuppa coffee are no longer the best way to get things started, the social trend has shifted to either talking over pints of beer or something amusing like Beer Pong Table. The Beer Blaster Liquid Shooter offers an entertaining excuse to use Beer and brings out the child in you. 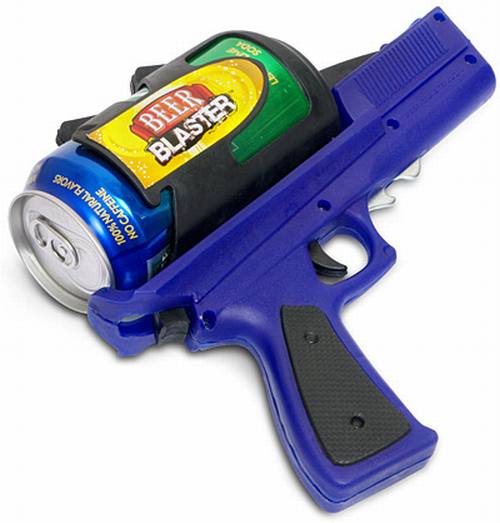 As children, playing with water guns definitely had no parallel. Replacing water with beer probably suggests it’s a toy for adults and just another excuse to indulge in beer-drinking session, even if it comes out of a blue gun nozzle! So here is how you use the beer-spewing gun. Firstly you shake our unused can of beer (one can try other carbonated drinks too!) which will spark all the carbon dioxide action inside. Then push into the reservoir holder of the Gun and then lock it. Locking would puncture the can with a needle whereas the pent-up pressure in the can will make you ready for blitzkrieg. So you can enrich your beer session by either having a bull’s eye on someone’s butt or just filling a mug of chilled-beer-goodness for yourself.

The Beer Blaster Gun has a shooting range of upto 10 feet and features an integrated bottle opener. A word of caution was mentioned that users should avoid driving after shooting (read drinking through the Beer Shooter Gun!) Well, beer in irrational quantities can make one forget civic sense and fun doesn’t mean you’re exempted from being careful. Anyway, you can buy one for $22.99