We all know how important the Game Boy was during the early nineties: It was an 8-bit handheld video game device that managed to reach a cult status across the world within no time. The early nineties were also years when the world was struck by wars and battles, with the Gulf War in Iraq was one of the most prominent of them all. When the Americans attacked Iraq then, the soldiers had no choice but to take their handhelds with them. 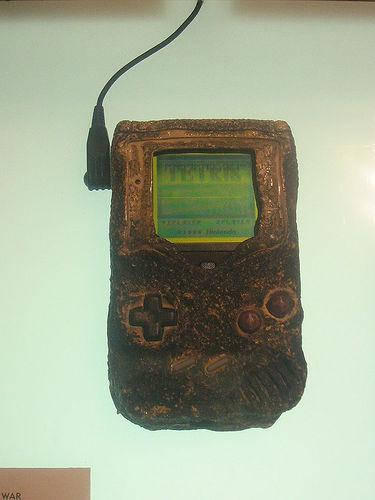 Certainly not all soldiers that fought the wars were geeky but some obviously were, and as proof to that claim stands this Bombed Out Game Boy. The funny thing is that it still works. It is not clear to me who the owner of the Game Boy is or was, and if the person who once played using this Game Boy is still around. It might also be presumptuous to say that the Game Boy belonged to a soldier. It could very well have belonged to someone else as well!

Even when they are bombed out, Game Boys can still manage to survive and enchant the world with their geeky charm. I especially like the way the exteriors of the console is burned out and also the way the screen remains undamaged. Of course, all this means that the Game Boy handhelds were built to withstand anything, even large scale bombing during the Gulf War when many lost their lives.