The Ultimate Buy-One-Get-One Free Offer: Get A Cool Supercar Free With This Luxury Yacht

Phew! That was one of the longest titles I’ve ever given to any of my posts, but I’m in no way trying to make a mockery of something, it’s as real as you and me, and would get even more real if you had 29 Million Dollars to spare, blowing it up on a luxury yacht. 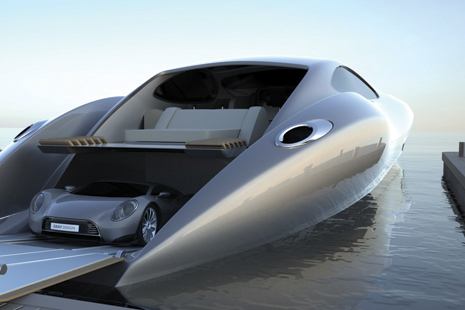 The cool yacht is the product of a Swedish company called Strand Craft, and they claim that they have the ultimate luxury combo offer that has ever been set open in the market. This high end yacht runs on a twin MTU 16V000 engine, and has the ability to achieve 55 knots with optional Rolls Royce KaMeWa boosters offering a staggering 14,000HP while the supercar is powered by a 880HP twin turbo V12 engine, and has a top speed of 375KPH.

And if you are worried about leaving your cool freebie at the shore while you take a nice spin in the waters, fear no more. You can actually carry your supercar with you right in the belly of your Yacht (reminding me of Jonah and the Whale).

The luxury yacht also has a plush Art Deco interior, and boasts of  4 large double state rooms, a reception area, salon, 52″ LED TVs, and state-of-the-art sound systems in every room – all of which can be changed as per the choice of the clients. 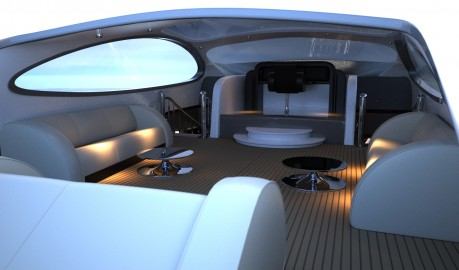 The whole yacht is based on a futuristic theme, and has been quite appealing to the rich folk of the world, but as for us, the middle class folk we should definitely have a look at Credo E-Bone Concept Bus that aims to make our lives a bit greener.