Smartwatches may be ubiquitous, but some of us prefer conventional timepieces, as their batteries last longer (if we’re talking about Quartz watches) and they are supposed to do one job only: tell time.

That being said, the Type 50 Limited Edition LED watch created by Montreal, Canada-based Division Furtive is anything but conventional. To start with, it does not have any buttons, so the ones who don’t know what the Type 50 is about might be led to believe that the watch’s hour and minutes cannot be set. Needless to say, they would be wrong, as the wristwatch can be set, and even in multiple ways.

Division Furtive created an innovative system that relies on light signals for setting the watch. The first method implies using your computer’s display as the source of light. You need to go here, select the offset in case you’re traveling, and click on Set. The other method relies on the Division Furtive Android app. Tapping or double tapping the front crystal provides access to additional functions, such as day of the week and Moon phase.

The energy saving function of this watch is really impressive. The LEDs only light up to tell you the time when you’re looking at the watch, so some sort of accelerometer must have been used. In all other situations, the device is in a sleep state that preserves energy. This is definitely something other watchmakers could learn from. Type 50 uses an AAA battery, as well as a backup battery to remember the settings while changing the main one. 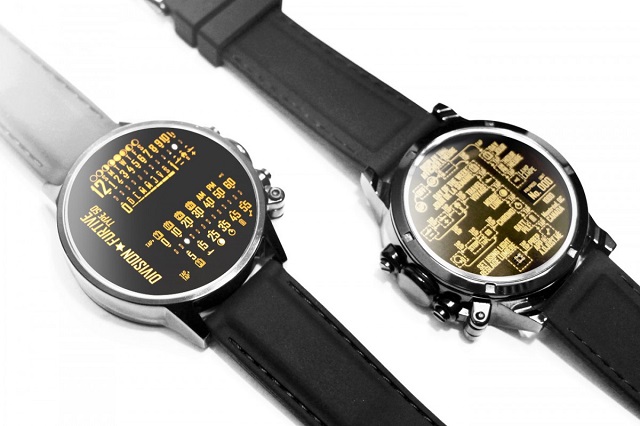 Division Furtive turned to Kickstarter to get their project crowdfunded, much like they did in 2012 with the Type 40 and Type 46 limited edition watches. The campaign is not over yet, as there are still 7 more days to go, but the $49,970 CAD funding goal has already been reached, so backers will receive the Type 50 LED watch in January, February, or March, depending on how much they pledged. Early Birds could secure a timepiece for themselves for the equivalent of $174, but all those spots are gone now, so if you still want one, consider pledging $219 or more. Only 1,000 pieces will be ever made, so if you want one, hurry!

Type 50 isn’t for everyone, but just for those that can appreciate innovation.

Be social! Follow GadgetHim on Facebook and Twitter, and read more related stories about the Hemingwrite mechanical typewriter-like e-Ink keyboard, or the TUL suitcase that weighs itself as you load it.