Story lines revolving around time travel may have been banned over in China, but there is still plenty of interest in the concept in the rest of the world. Doctor Who is arguably one of the most popular series revolving around traveling through time ever made, and there are certainly enough fans of the show out there that would want this Doctor Who Eleven Doctors Action Figure TARDIS Box Set. The set features a wide variety of characters from the show in a high-quality and detailed action figure format. 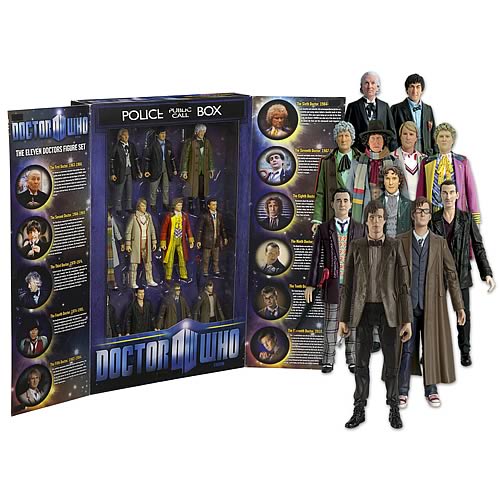 My gut reaction would be that the set is geared toward collectors of such figures, although I would like nothing more to bust it open and start toying around with them. The set comes in a nicely packaged TARDIS display box, so you can easily take a gander at the figures without removing the precious packaging. Mint condition is also guaranteed, so if you are in the market to collect them you don’t have to worry about that attribute. The set has all 11 of the incarnations of the famous doctor, so you can argue with all of your friends as to who is the best of the show. The set does command the price you would expect of a collector’s item, however, weighing in at $99.99. It will be up to you to decide whether 11 5-inch tall action figures are worth one hundred bucks.

Of course if you are a fan of the show and don’t want to drop that kind of money there are plenty of other Doctor Who items that we have featured here on Gadgethim. The Doctor Who Sonic Screwdriver Ink Pen is a great way to show off your Doctor Who spirit. You can also have some coffee with your time travel thanks to this Doctor Who TARDIS Mug. That also serves as a collectible item at a much lower price point.