Electroadhesion Robot Could Do Incredible Jobs

In today’s world, in an effort to control natural disasters, threats, public safety, and military actions, new inventions and discoveries are taking place. All the more, various random researches have shown that in robust robots are put into services they can easily handle any untoward situation which humans cannot pursue. 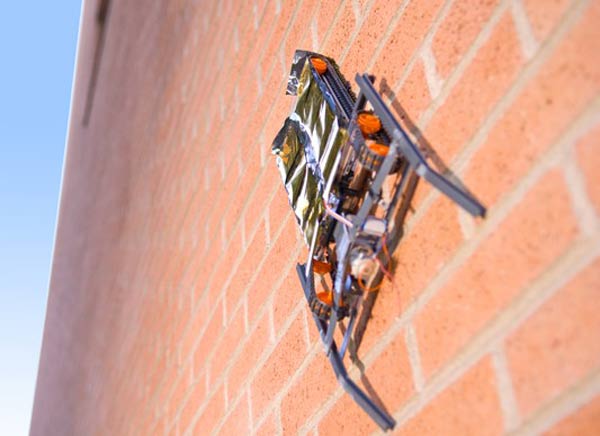 In an effort to achieve this goal, a company named SRI, has introduced Electroadhesive robots into services. These types of robots have the ability to travel vertically across difficult terrains including sky-scrappers. It is a sure shot reason that these types of electroadhesive robots can be exercised in military operations too. As its name suggest, Electroadhesion is an adhesion technology which can easily be controlled by electricity. To operate it successfully, electrostatic charges on a wall are generated which give fillip to its pads while connected to power supply substrates. This new technology introduced by SRI is also known as clamping technology, it is with the assistance of this technology that wall-climbing robots can achieve its task.

In order to prove its metal, SRI has successfully demonstrated robust clamping in the range of 0.5 to 1.5N, with ordinary building material viz grass, concrete, metal, etc. It has been proved that electroadhesive can work successfully if allocated the job anywhere including rough or smooth terrain. This technology has given birth to different kinds of robots besides wall-climbing robots like there are biomimetic inchworm-type robots, which have successfully been proven. The advantage of using electroadhesion technology include non-damaging in nature and being lightweight, which is critical in wall climbing tasks.

According to the company, the wall-climbing robots as of now are being controlled via remote control, but in future, the company has planned to control it via GPS receiver. Its pads are easily scalable to different dimensions. Such is the elasticity of these robots that they can easily be controlled through its speed, surface requirement, and payload. These robots can be customized for particular missions.

There is a wide range of applications available, for example, wall-climbing robots can be used for military, while Inspection Robots are utilized for the inspection of bridges, storage tanks, structural walls, duct, ship hulls, communications, transmissions, etc. While Service Robots can easily be utilized for cleaning purposes, painting (buildings, aircraft, bridges, etc.). Robots are also found as Toys and for hobby purposes. These Robots could also be utilized in such applications which require three-dimensional mobility. Other interesting stuff you may appreciate include Raptor VX9 GTR and New Technology Wire EV Charging System .

One thought on “Electroadhesion Robot Could Do Incredible Jobs”