Once the head of the state, we all know George Bush for his controversial decisions and his autocracy, thus creating a huge turmoil and chaos in the whole world. Well it’s time to clean up; and with the present head of the state not being much of a difference, let each of us take an initiative and begin the clean up process with the help of this Bush Toilet Cleaner. 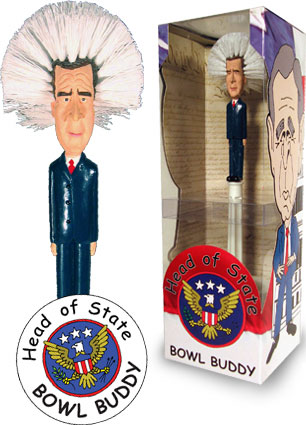 This amazing new product that has just been launched into the market is in huge demand by the various governments of the world. Probably because of the fact that this tool proves to be a great weapon against the political shit that keeps on accumulating in the various regions of the world. Now, you have the golden opportunity of getting one of these sacred tools of cleanliness, also called as the George Bush Bowl Buddy at just $19.95

. Let me also inform you that the stock is limited and you have the governments of the world in competition.

Standing 16″ tall, this is just too prefect to get to those ‘hard to reach’ grimy spots. You can also have a look at some of the other cool cleanliness accessories like the award winning Dust Bin or the G182 Robot Vacuum Cleaner