Have you ever seen the movie Beerfest? If you haven’t, then I suggest you go rent it right now just for fun. If you have, then you probably recognize “Das boot” immediately, although it was originally made popular by German soldiers celebrating a victory by knocking back a few cold ones. A giant boot made of glass that holds up to four beers? Where do I sign?! 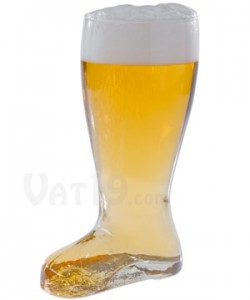 The estimates may vary as each boot is hand-blown, but you will get about 40-48 ounces of beer into your own boot. That is some serious boozing power, so keep that in mind when you are trying to keep track of how much you have imbibed so far. If you don’t think you would be up for chugging 4 beers in one sitting, the boot is also up to some other tasks as well. These include a glass candy boot jar, which could easily be filled with your favorite candies like M&M’s, Reese’s, Hershey’s Kisses, or Skittles. They also have a picture displaying the boot being used as a dispenser for syrup at the breakfast table. Yes, it looks as ridiculous as it sounds, and that little breakfast scenario does not end well. Best of all, these hand-blown monuments to alcohol are available for a mere $14.95.

As you might expect, this isn’t the first beer-related gadget that we have featured here on Gadgethim. if youa re in the mood for some fantasy themed bar ware, then you have come to the right place. These Lord of the Rings Etched bar glasses would be the perfect addition to your local roleplaying game. Alternatively, you can fill “Das Boot” with your very own beer, and you can get started with the complete home brewer’s kit, which includes everything you would ever need to get your own microbrewery up and running.