Go Devices invented a keychain that doubles as a memory stick, smartphone charger sync cable and keys locator. In other words, this might as well be the ultimate keychain!

GOKey really is a very versatile keychain. Hopefully, it’s more than just a Jack of all trades, master of none. Probably its most important selling point is that it reunites all these useful gadgets into a small device that can be easily attached to a keychain. 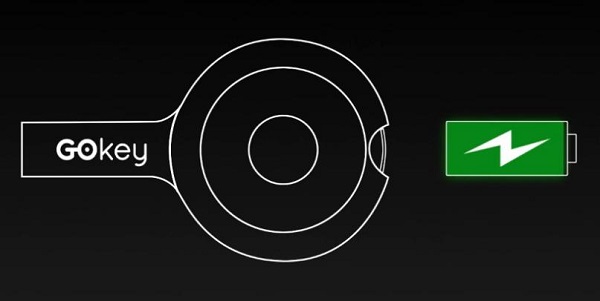 Come to think of it, in our digitalized world, we need a USB flash drive almost on a daily basis. Besides that, having the chance to boost our smartphone’s battery when it’s running low could literally save your life in certain circumstances. Shaking GOKey will reveal the amount of current left in the gadget, so that you know if you can rely on it for charging your smartphone, or if itself needs to be charged.

Sync cables might be useful, as well, especially when not at home. As for the key retrieval function that relies on Bluetooth to do that… if you’re not extremely clumsy, and you place your keys in the same place everytime (like I do, even though that might be a clear sign of OCD), the chances of losing them are exactly null.

As if that wasn’t enough, GOKey can also act as a remote for your smartphone, allowing you to take pictures without holding it in your hands. Music controls have also been implemented in the keychain, and shuffling through songs couldn’t have been easier.

GOKey is currently featured on Indiegogo, where its developers wanted to raise $40K, so that the gadget goes into mass production. The good news is that people backed the project with 20 times that, so everyone who has pledged $59, $69 or $79 for 8, 16 or 32GB, respectively, can expect to receive his GOKey in the following months. Except for the capacity, the different versions of GOKey do not have any other distinguishing characteristics.

Well, actually there are some variations, but those don’t actually affect the price. For example, GOKey is available in two color options: black or white. Besides that, people are able to chose whether they will use the smart keychain in tandem with iOS, Android or Windows Phone devices. The difference is obviously given by the Lightning or the microUSB connector that GOKey comes with.