If you care about the environment and care about your health, riding a bicycle to the local grocery allows you to do both with a single push of the pedal. Riding a bicycle, when the sun is up with a gentle wind blowing, works magic on your stress levels and leaves no carbon footprint behind.

The only downside is that when you park your bicycle outside the grocery, some miscreant might just eye your ride and make way with it. It is not a pleasant experience when you come out of the grocery with your shopping bags only to find your precious bicycle stolen. 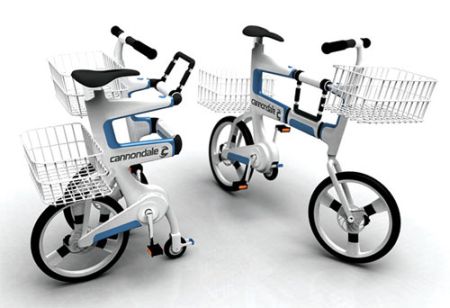 Designer Hyuk-Jae Chang has come up with an intelligent bicycle concept that will make your bicycle theft-proof.

‘Ville’ is an urban bicycle concept based on traditional bicycle models. It has a handle, a seat, two wheels, and two baskets: one in the front and one in the rear.

The Ville is a straight lined bicycle, but has a rectangular frame that connects the front portion of the bicycle to its rear rather than the traditional triangle frame found in other bicycles. This rectangular frame allows the Ville to transform into a shopping cart.

If Ville’s two-in-one role will catch your attention, its design aesthetic will catch your eye too. The futuristic bike concept has seats, handles, and the two tyres in black while the frame of the body is colored white with thick blue lines running along the edges.

Another impressive feature of the bicycle is that it features disc brakes instead of rim brakes. This would allow the rider to have greater control while riding the Ville.

Designer Hyuk-Jae Chang was awarded the bronze prize at the IDEA Design Awards 2010 for the Ville concept. Hopefully we will get to buy it in markets soon.

You could also go through few other designs such as Jaguar Motorcycle Design and Hovercraft Board that would grab your attention.