If a tornado came upon a huge music instrument store, this is how it would look like. This jaw dropping installation at the Experience Music Project in Seattle is a structure worth many words. The installation, designed by the German artist Trimpin, offers a dynamic journey into the evolution of the American popular music and its histories. Yes, this is more than just a structure that visitors should look at. Aided by a touchscreen interface, visitors can use headphones (a cool pair here) to go through the various musical presentations as music, provided by the structure itself plays in the background. An installation that plays music? Yes. 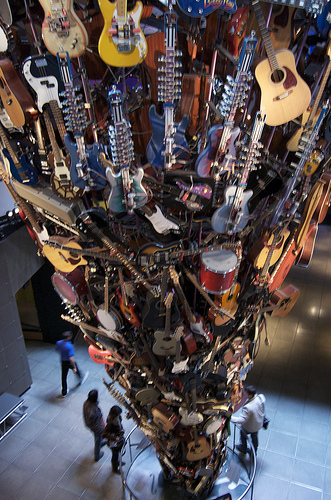 Here is how it works. Among the huge mass of countless guitars are numerous specialized robotic guitars, which play the music on cue. As expected, all this is run by computers, but it’s not as virtual as it sounds. A lot of real life analog techniques also go into making this such a success. 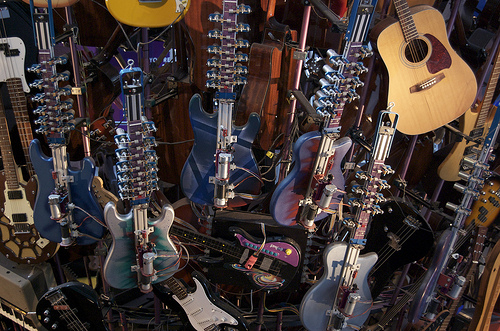 The computer does the job of triggering the motor of the robotic arm as and when the music is required and the motor in a good old fashioned way, plucks the string of the guitar thereby creating a sound. The only limitation is that one robotic arm can only pluck one string on the guitar. Meaning that one guitar can only play one note. Then how to get this monstrous structure to play chords? Simply by using multiple guitars to play different strings and notes thus creating the effect of a chord being played on a single instrument.

The installation called “IF VI was IX: Roots and branches”, uses music played by real live musicians recorded onto a computer and digitized into the MIDI (Musical Instrument Digital Interface) format. The computer and the structure communicate via MIDI to figure what particular note to play at what time. This tour gives the visitor the complete spin around, starting from early acoustic folk music all the way to the decadence of punk rock while making small blues and rock and roll stops on the way.

This is a must see if you are in Seattle (the home of Hendrix) and especially if you love music.

One thought on “Guitar Tribute Tornado”