Do More with Your iPhone With the iPhone Screen Enlarger

With the release of the latest generation iPhone- the iPhone4, there has been much talk and natter amidst tech geeks over the fact that it uses the same A4 processor as the iPad. With that the only advantage an iPad could have over the iPhone is its size. It is six to seven times bigger than the latter and therefore is convenient for video viewing and browsing. Apart from this feature, the iPhone is much more useful in many other ways such as, you can make phone calls and send text messages using it, is equipped with a camera and many more sensors, making it much more user-friendly. So essentially, the problem lies in its 3.5 inch display. With Hammacher Schlemmer bringing out the iPhone Screen Enlarger, the two are now even. You can now use this essentially practical and handy gadget to transform your iPhone into a tablet computer! Exclusively priced at $139.95

, as compared to the previous price of $199.95, it is an easily portable LCD screen of seven inches, which basically enlarges the view on the iPhone’s display screen so as to make the screen more convenient to watch. Takes it up a notch higher, doesn’t it? 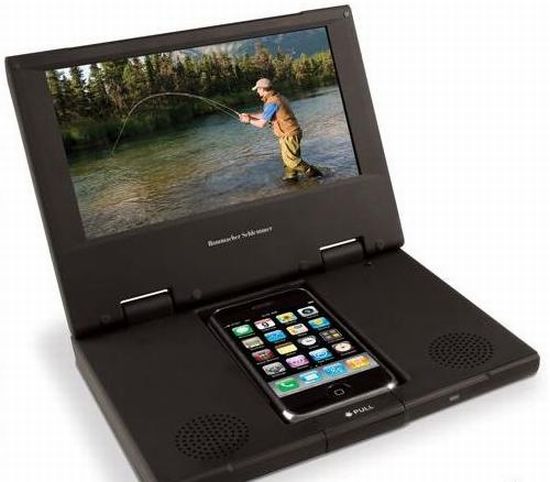 The iPhone is internet-enabled, and has a vast-capacity to contain any multimedia and still manages to support GSM services like a common phone. To do its capabilities justice, it is a wise choice to purchase Hammacher Schlemmer’s iPhone Screen Enlarger that highlights the iPhone’s feature and competence like never before. In fact, it not only flaunts a larger screen but also has speakers that are much more audible. This way, it could also be used along with your iPod touch. Imagine the things that you could get done when these gadgets get together and get their fireworks up and going?

The iPhone screen enlarger looks very much like a normal notebook, except for the fact that it has no keyboard. This is where you dock your iPhone or iPod touch. The screen resolution is a good 480×234 pixels and sports two 1-watt speakers on it. There is also a headphone socket bridging the gap between the iPad and iPhone still more. The iPhone Screen Enlarger comes with a rechargeable battery and can be operated for upto two hours on full charge. It comes with a very confident lifetime guarantee, which speaks volumes of the product, and is compatible with the iPhone 4, iPhone 3G and 3GS.

Wonderful, isn’t it? I am sure an addition of Ultra Tough iPhone Case, Cassette Case for iPhones or iPhone Rotating Speakers will makes possessing iPhone worth it.