The mere word of Lego conjures up the images of kid’s toys. But nowadays, after seeing some reputable creations made from these Lego boxes or bricks, it can be said that even teens have also started taking interest in it. 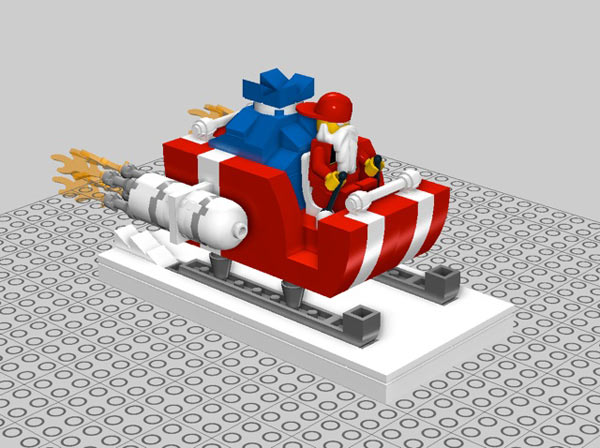 Take the case of Lego Santa’s Sleigh, after seeing this cool assimilation of Lego bricks, one can see Santa traveling without his favorite’s reindeers, instead he has 20th century rocket power sleigh with him. Hoping that Santa would reach within the proximity of kids within no time from heavens! Available at $35 from Lego.com, this latest product of Santa sleigh kit would surely win the hearts of many kids and teens alike. You can order the toy by downloading the new Lego Digital Designer 4.0 software and click on “Buy” to buy the product.  In case you wish to add reindeers to the sleigh, you are at liberty to do so through Lego bricks which are purchased separately. In case you are not satisfied with the design of Santa with a rocket power sleigh, you can opt for the traditional sleigh. You can also customize the color of the toy bag if you require.  As of now, Lego is giving the minifig of Santa along with Lego purchases. It will be great to have this minifig right now for your geeky Christmas tree. When the stocks last you will have to shell out at least $10 more if you order the individual parts you require.

Since time immemorial it has been seen that minifig of Santa, available in different designs are able to convince one and all. The mere look at Santa toys and sleigh also remind that Christmas is around the corner. So it will make a sense to own Lego Santa’s Sleigh. Other attractive toys you may admire include Build Your Own Racing Car and Illuminate Light Spaces with the Magnetic Light Mine