Meet the Webrunner from Arachnos

Spiders are one of the most feared and hated creatures on planet Earth. Just one spider crawling around is enough to scare the living daylights of even the bravest. Imagine what would happen if we encountered an army of giant four- legged spiders from an alien planet.

In the far reaches of outer space is a spider-infested planet called Arachnos which has been struck by an asteroid. The impact has caused some of its inhabitants (read giant spiders) to land on our planet. The army of giant spiders have acclimatized themselves to our surroundings and are now wreaking havoc on Earth. The alien spiders have been codenamed Webrunners. 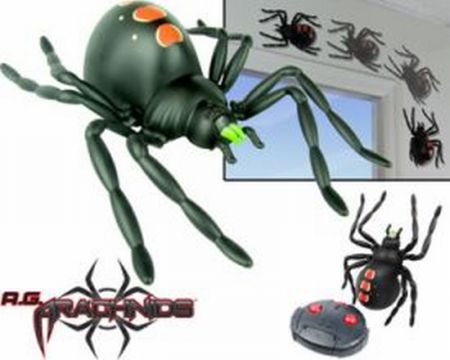 Arachnos is a fictional planet and the army of Webrunners are fictional beings created by toymakers, Fantasma Toys to launch the brand new line of spider toys called ‘Webrunner.’ Fantasma Toys have taken a scary creature like the spider and turned it into a cool thing to have with an imaginative execution. 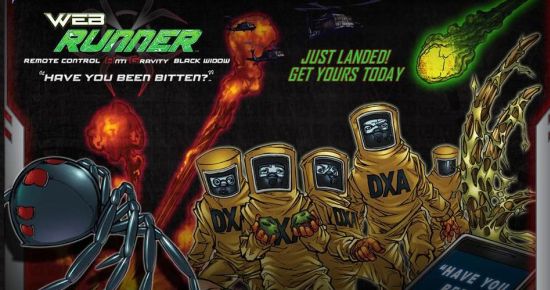 Webrunner is six inches wide, eight inches in length, and 2.3 inches tall. It has a gorgeously shaped black body frame made of two connecting ovals. The rear portion of the body has three circular dots with a white semicircle around it. The red dots break the monotony of black and provide a visual edge to the spider toy.

Real life spiders that crawl and exist around us have inspired the Webrunners’ design. The legs of the toy are realistically articulated and have a spin degree similar to the legs of a real spider. The ‘chassis’ of the model spider is made of lightweight material that allows the toy to crawl at lightning quick speed.

Since the Webrunner is a spider toy, there needs to be a fright element to it. The toy does not disappoint in this regard. Attached to the face of the spider are two white colored fangs that have fluorescent green ooze sticking to its tips. The eyes of the spider model are red in color and can glow in the dark.

The Webrunner not only looks like a real spider, but can also do what a real spider does. It can run on walls, floors, and even run on the ceiling with its advanced air suction technology. All this and more can be done with a remote control that is provided for users.

The Webrunner is a cool toy to have and can definitely be used to play pranks on friends and relatives.

You can also take a look at other gadgets, which have drawn inspiration from spider – MiniWalker Robot and Spider Car Concept.