Since I was a kid, I have always enjoyed the power of Nerf. It gave you the ability to wage epic warfare without the harsh reality of getting shot in the face. Since my childhood, nerf guns have only served to get more ridiculous, both in an official aspect as the company has produced guns that are bigger and better, but also from everyday geeks who saw a great way to make a mod. Regardless of your tastes, here are some crazy Nerf guns that any fan of soft darts will be sure to enjoy. 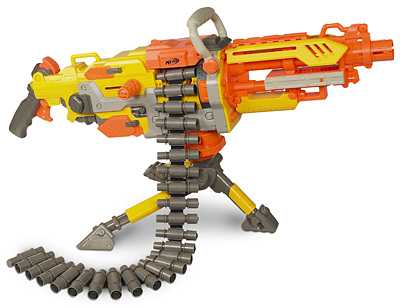 Sometimes, your average sidearm just isn’t going to get the job done. For those occasions, you need something just a little heavier, perhaps a faster fire rate. This Nerf Vulcan Automatic Heavy Blaster is here to fill such a role, and you’ll probably feel a whole lot like Rambo when firing it. As you can see, the blaster is mounted on a tripod, and the gun has the ability to fire every few seconds with a belt-fed ammunition clip of 25 darts. Not bad at all for a completely harmless heavy machine gun. 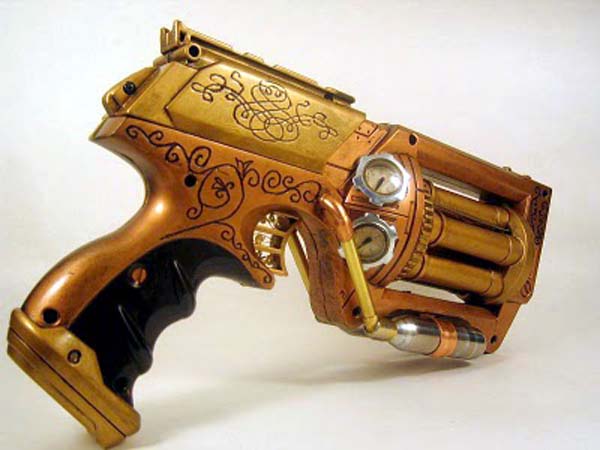 Apparently, even in the far flung wastelands of the Steampunk future, people will still use nerf guns. The typical neon coloration scheme just won’t due, however, so you’re going to need something a little more elegant. Thankfully, this Victorian era nerf gun is here to fill that niche for you. As you can see, this little toy has undergone some serious modifications, and it almost looks realistic enough to be featured in a post-apocalyptic Hollywood flick. At the very least, it would be a fun toy to mount on your wall and show off to your geek friends who can truly appreciate the value of a well modded nerf gun.

The Vulcan may have superior firepower at its disposal, but sometimes you need to be able to shoot on the move. This Nerf Raider gun is ready to step up to the plate in this capacity, although it does remind me of a gun straight out of an old James Bond movie. The Raider can hold up to 35 darts, which if you are keeping count slightly edges out the Vulcan, so you’ll have the advantage of longetivity in an extended firefight. 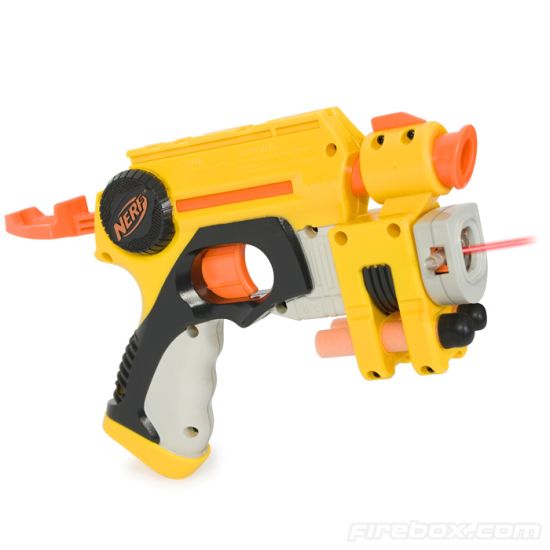 If a situation demands you being able to move around with a bit of subtlety, then the Raider isn’t going to fit the bill. Instead, try this Nerf-N-Strike Nite finder, which is designed for operations at night, although I am sure it would be just as functional in the middle of the day. The nite finder does have a rather nice looking targeting laser mounted to it, even if your effective range with a nerf gun probably means you aren’t going to need it anyway. If you wanted to get creative, you could have an all nite finder mission in pitch black conditions. Then you could use your laser properly to track down and mercilessly destroy your opponents 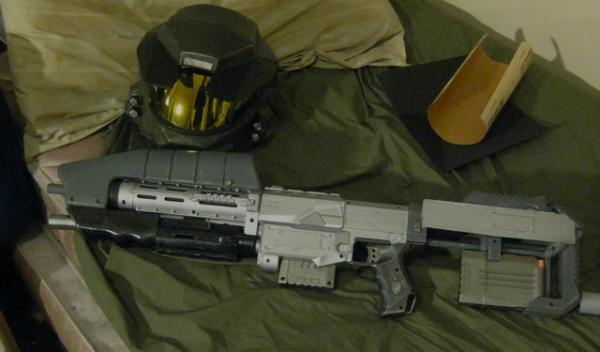 With the recent announcement that there will be a new HALO game despite Bungie’s departure from the franchise, that likely means that HALO swag will still be in style for some time to come. This homemade HALO Nerf Automatic Rifle shows us that even the weapons of the future can be reconstructed with harmless foam dart delivery systems. If you don’t immediately recognize the gun, it is the Assault Rifle from the many games. I never liked the rifle much myself and instead lean toward heavier ordnance such as a rocket launcher or plasma grenade. That doesn’t make this modification any less cool, and I’ll be the first to admit it looks very much like the genuine article, minus the ability to mow down enemy forces at will, that is. This must have taken quite a bit of time and effort, so kudos to the creator, Moz, for pulling this off in such a grandiose fashion. I would love to bring this thing to the next Nerf fight that I get into, just to see the jealous looks on my opponents faces before I put a dart right between the eyes. Always wear safety goggles.