Now Carry Your Bike in Your Suitcase

Traffic congestion is one of the major irritants of urban living.With each passing day, the traffic situation seems to be getting worse with the growing number of vehicles on the road. Being stuck in traffic jam results in wastage of time, as it is purely a non-productive activity; it also leads to increased levels of stress in motorists, which then results in road rage. Most of us would have encountered traffic jams and would know how frustrating and stressful the experience can be.

Mathematical and economic theories have tried to explain why traffic jams occur, and they continue to seek out a possible solution. Despite all the research and experiments, a straightforward solution to the traffic problem has not yet been forthcoming. In such a scenario, Israeli designer Gosha Galitsky has a two-wheeler solution that may not magically solve the traffic conundrum, but will allow people to avoid serpentine traffic jams. 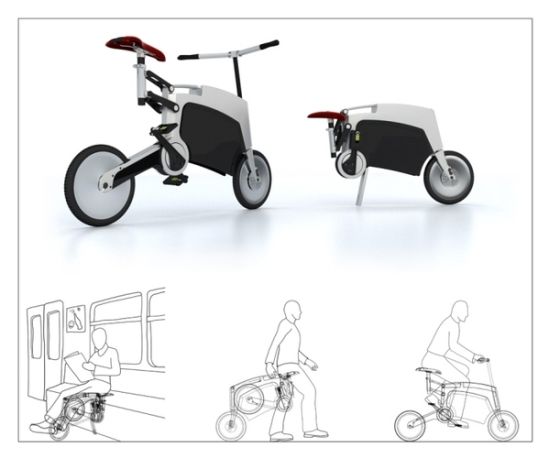 Galitsky’s solution for an easy commute is the ‘Suitcase Bike’: a foldable bicycle design. There are foldable bicycles available in the market. The most popular brand in this niche segment is Bike Friday: a touring bicycle that fits in a suitcase. Present day foldable bicycles are heavy and difficult to carry around. That is one reason why we don’t find them in the big cities.

The Suitcase Bike overcomes the disadvantages of the current crop of foldable bicycles with its lightweight frame and folding mechanism. The body frame of the bike is crafted from a synthetic material that is extremely light to hold, but tough enough to withstand considerable pressure. The folding mechanism of the bike tucks the delicate and greasy components of the bike inside its suitcase frame.

What makes Galitsky’s concept model an ingenious practical design is the way the bike folds, allowing the rider to carry it around with ease. The bicycle can be folded into a more compact shape by pulling the rear wheel of the bike into its body frame. This is achieved with the flexible axle of the rear wheel that is attached to the pedal. The rider can pull the rear wheel, turn it to a 180-degree angle and attach it to the frame of the bike. Once the rear wheel is pulled inside, the front wheel of the bicycle is then used as a supporting wheel to carry the Suitcase Bike around.

The Suitcase Bike is a model that harrowed commuters would want to own as soon as possible.