As a child most of us would have dreamed of flying around in space on some cool spaceship and going around saving people. We all must have had different versions of our dreams but one thing might have been common in every dream… the spaceship – The cool Millennium Falcon, Han Solo’s rouge space fighter that would get you anywhere you wish and help you win battles in a flash. 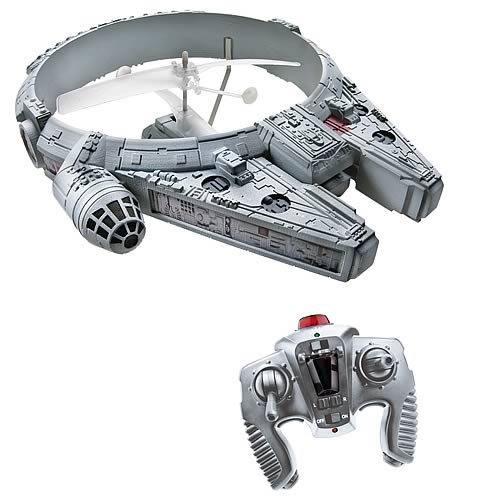 This cool RC controlled Millennium Falcon is what every Star Wars fan as a child would have wanted for his Christmas or his Birthday present. Selling for just $59.99 this cool Fighter is the perfect gift for every Star Wars fan who is still a child at heart. It has a central rotor that provides it with the necessary lift for a vertical takeoff, since the body is made from foam it is quite light for its huge size, also there is a special ring provided around the blades so as to protect your walls and furnishings from damage.

But as cool as it may sound it has a major glitch though, it is only designed for an indoor flight time of 5 minutes per session, so it’s like you’ll have to win all your battles in under five minutes, anyway you can also have a look at the cool Star Wars Vader TIE Fighter Model or the Miniature RC Hummer that will turn your office in to a rally track.