Robby the Robot is a seven-foot tall fictional character who was a 60s science fiction and fantasy icon. The robot first made its appearance in the 1956 science fiction classic, Forbidden Planet.

In the movie, Robby the Robot is created by Dr. Edward Morbius; the doctor programs it to obey the Three Laws of Robotics:  A robot may not injure any human being. A robot must obey any order given by a human. A robot must protect its own existence.

Robby obeys the laws to such an extreme that in the climax of Forbidden Planet it refuses to kill the villain, which is an alter ego of Dr. Morbius. The robot realizes that if it kills the ‘id monster’, it could kill the doctor too. 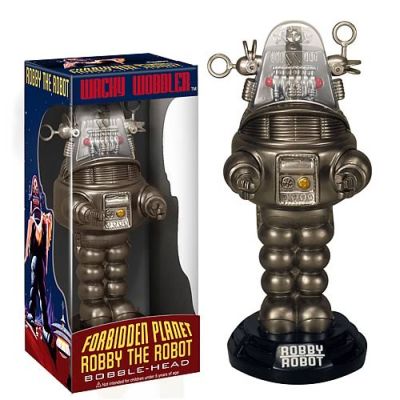 After appearing in the seminal science fiction movie, Robby the Robot has made many appearances in films and television shows including the Twilight Zone, The Simpsons, and Futurama.

The toy model is six inches tall and features distinctive characteristics of its screen avatar.

It has the same spherical, transparent skull that features a complex arrangement of electronic circuits and lights. The hands are made up of the same spare metal tools that allowed the screen robot to accomplish various tasks.

Another eye-catching feature of the model is the pair of screws attached to its transparent skull. On closer inspection, the screws look like duck heads to which metallic keys are attached.

Robot designs of the 50s and 60s were mostly large, bulky, and a lil silly. Robby the Robot in Forbidden Planet also had the same characteristics.

Robby the Robot Bobble Head is not far behind with its upper body that bobbles when pressed. That being said, the toy model achieves the classic retro look with attention to detail such as the grey color tone, linear articulations on the body, and brown metallic finish.

Due its influence on progressive robot designs, Robby was inducted into the Robot Hall of Fame. If you love the classics and want to possess a piece of pop culture history, Robby the Robot Bobble Head would make an eye-catching memento at $12.99 .

To learn more about such stuff, go through Wolfman and Bobafett Keychain Figure.

One thought on “Robby the Robot Bobble Head”