If you are a fan of flight simulation systems, you would be looking for more information about the product. Here is a latest update for you. Saitek has introduced a PRO Flight Throttle Quadrant in an endeavor to give you more controls for your flight simulation setup or experience. 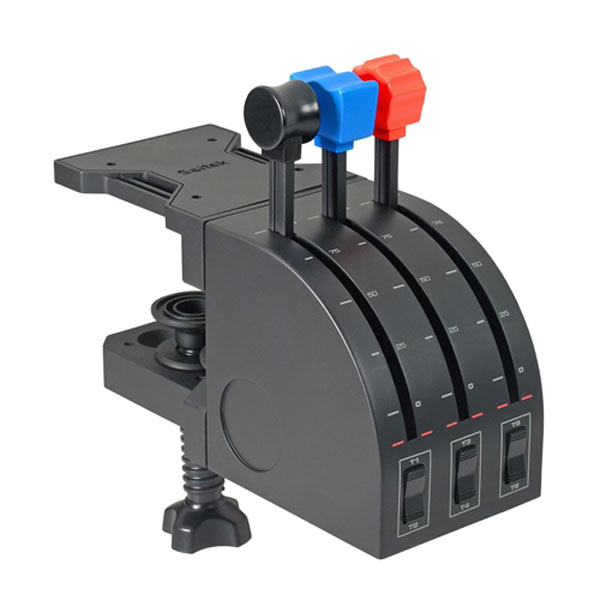 As you’ve seen in the earlier version, trying to  fly an engine aircraft in the absence of a few throttles turns out to be a boring and difficult task to fly multi-engine aircraft.

But with the introduction of the Pro Flight Throttle Quadrant, you are going to be touted as professional because with the introduction of this improved version, three additional levers have been added. Besides, the product also contains interchangeable heads. In the new system, you can easily adjust the elevator trim, control aircraft throttles via its levers, and can engage inverse thrust while landing.  Moreover, there is a facility for fuel mixture also. The main purpose of introducing three separate levers is to control additional engines, gears, spoilers, flaps, and other controls which you intend to assign.

With this Pro version, you can add additional engines and controls instantly. Your simulator’s cockpit becomes hi-tech with the introduction of three two-positioning momentary toggle switches, which comes to about nine programmable buttons all in all for you to play with. Last but not the least, the design of the Pro Flight Throttle Quadrant facilitates to be mounted in front of or on top of the desk, now you have the ability to mount it on pilot or co-pilot side also.

The PRO Flight Throttle Quadrant pack is available for $59.95

also included is Saitek Smart Technology programming software which is compatible with Windows 7, Windows XP, XP64, Vista, Vista 64, and all Saitek flight control products. Other class products you may like to experience include the World’s Geekiest Smallest Da Vinci Ornithopter and Lego building blocks