The Classic arcade game, Space Invaders is one of the most popular and revolutionary arcade games in history. When it was released by Taito in 1978, it created a fan following so great that around that time in Japan there was a shortage of the 100 yen coins, which were required to be inserted to play this classic. Now you can get your very own Space Invaders Replica Coin Bank and hours playing the greatest arcade game of all time right at home. 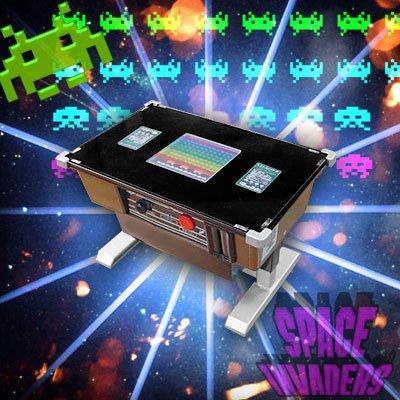 This Space Invaders Replica Coin Bank is the exact 1/6th replica of the greatest arcade game ever made and owning it will definitely help you save some of your money. This replica, like the original, can be played only with the 100 yen coin, which comes with its purchase but unlike the arcade you can take out the 100 yen coin, enabling you to play the game as many times as your heart desires, without shelling out a penny.

Every aspect of this coin bank, including the control panel, is made just like the original arcade game and it can store up to 80 pieces of 100 yen coins at a time and can store other currencies as well. To play the game all you need to do is insert the 100 yen coin and press the hit button and you can enjoy this vintage game with the real sound as it was when you played it as a kid. Get this coin bank at Strapya-World for just $60.40!

Also check out the cool Silver Space Invaders Pendant or the http://gadgethim.com/tetris-atari-arcade-games-piggy-banks/#mce_temp_url#.