Shaky hands have the potential of ruining videos, but thanks to a Seattle entrepreneur, all the videos you’ll shoot from now on using an iPhone, GoPro or any other compact camera in tandem with StayblCam will definitely look professional.

Seattle-based Norwegian-born Eskil Nordhaug created a stabilization gadget that solves some of the problems that lead to shaky videos. The portable device will come in handy for anyone who enjoys shooting videos using smartphones or high-definition personal cameras, and let’s face it, that has become a trend in recent years. If a couple of decades ago video cameras were extremely bulky, not to mention rare, now everybody has one in their pocket. Not only the quality has improved, but also the number of available accessories that help us shoot even better. 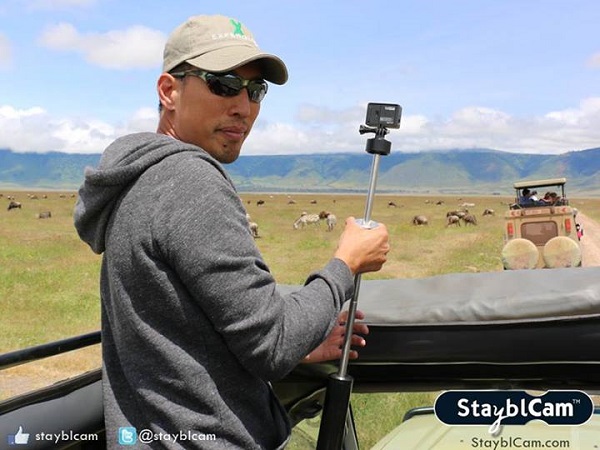 Come to think of it, old cameras shot videos that were terrible by today’s standards, and now we have smartphones that shoot in 2K resolution. On the other hand, what good to have such great features and such high resolutions if the video ends up being shaky? StayblCam is a tremendously versatile portable device that enables people to shoot video from as high as 3 feet above their heads and as low as one inch above the ground.

The gadget comes with a very firm grip in which smartphones slide. Alternatively, cameras weighing up to 300 grams can be fixed in position using a 1/4″ tripod mount screw-in. There’s no point worrying about the weight of the camera pressing on StayblCam. The hard impact-resistant polymer plastic it’s made of ensures its sturdiness in all sorts of scenarios. Besides, StayblCam is extremely portable, as it only measures 10″ when in compact mode.

The secret behind StayblCam is a gyroscopic grip action handle that ensures optical image stabilization even when using the device single-handedly. This feature makes it a serious alternative to other stabilizers that are currently available on the market, but that come at very steep prices.

Nordhaug launched a crowdfunding campaign on Kickstarter and by the looks of it, it definitely looks like his project is going to get funded. At press time, 275 backers pledged $24,771 of the $35K goal, and since there are 25 more days to go, StayblCam has great chances of becoming reality. You still have time to back this stabilization gadget with $79 in order to get yours in July.

Be social! Follow GadgetHim on Facebook and Twitter, and read more related stories about Oceanographer’s camera that gives you HD under the sea and these sneaky camera gadgets.