I agree that most of the LED watches we have seen coming up lately have been really weird. That’s one reason why many people like me are now feeling allergic to such watches. 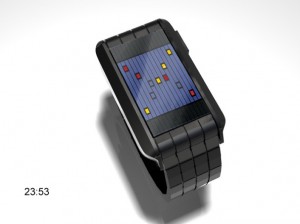 I remember the last LED watch I saw was really bulky and weird as if it came from Mars. Whoa! but look at what I got my hands on today. A nice, decent, stylish, and a very simple LED watch made by David for Tokyoflash. Before I proceed I really want to give David thumbs up for such a wonderful job. This watch has really changed the way I look at LED watches. I used to think it’s a technology which is meant to be ugly but it’s not. Today I realized that if you want, you can also make a pretty LED watch like David did.

The interface of this watch has yellow colored lights that show the hours and red colored lights for the minutes. The hours are displayed from top right to bottom left while the minutes are from top left to bottom right. That’s the good thing about the watch that even though it’s an LED watch, everything has been kept very simple to easily comprehend. There are 5 light squares for both minutes and hours. 1, 2, 4, 8, and 16 is the hour count whereas 1, 2, 3, 4, 8, 16, 32 (6 square red lights) is the minutes count. Lastly, the lines within the dial match the lines on the strap which is the beauty factor of this watch. Unlike most of the LED watches, this one has straps and the dial matching with each other.

Now, I don’t really have much information on the watch to share but I can say that the straps are either rubber or hard plastic. In either case, it makes the watch pretty much a sporty and sturdy one. To me it’s a very smart watch and the first LED watch I think I can wear to work. Although the colorful lights might look a bit casual, but the frame and the interface make it the most perfect watch for this month. Good job David!

2 thoughts on “A Simple Yet Stylish LED Watch Concept”