The fireplace has always had a special charm about it and makes a wonderful place to gather around with friends and family on a cold winter’s night but with about 80% of Americas population being cramped into space starved cities man was forced to do away with this wonderful part of his home; however designer Carl Mertens has found the panacea to this problem, he’s gone ahead and brought the fireplace to table top in a miniature form. 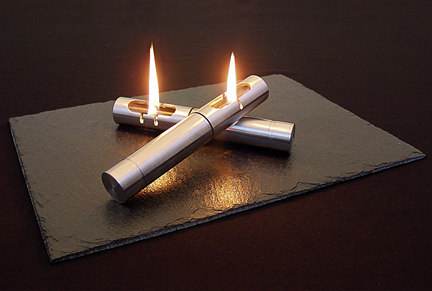 Now, in order to make the transition to the table the fireplace has under gone a major overhaul with the traditional wood being replaced by 18/10 logs of steel and the size of the flame being reduced to something that resembles a candle flame. Though this new miniature is no replacement for the original it definitely makes an interesting alternative to replace the usual candles for a romantic dinner. The product also includes a 10″ x 14″ base to hold the logs in place, which is a good thing because you don’t want flaming logs unnecessarily rolling about on your table. The fireplace sustains itself on liquid paraffin lamp oil which is a much greener fuel than wood.

This radical fireplace retails for $389 which may seem a little steep for something that could set your entire dining table on fire but then having a fire alarm turned ashtray around at that time wouldn’t do you any good as well, so i guess If you’re a geeky risk taker then this is perfect buy for you.