Count Dooku is probably not the most popular character of the Star Wars universe. He was an esteemed Jedi who became disillusioned with the ‘light’ side of the force and left it. Subsequently, Dooku is seduced by the dark lord, Darth Sidius, into joining the ‘dark’ side of the force.Dooku plays the main antagonist of Star Wars Episode II: Attack of the Clones. The Count is frustrated and angered by the bureaucracy of the Galactic Senate and plots revenge. He captures Obi-Wan Kenobi in Episode II and plans to execute him, but Obi-Wan is rescued in time. 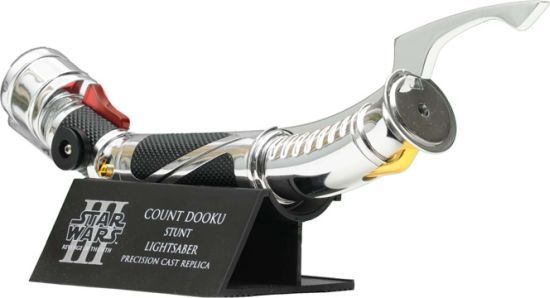 Even though the Count is a hated figure, he has one sweet-looking lightsaber, which, even the Jedi might not mind getting their hands on. (An observation: the villains of Star Wars have better-looking lightsabers than the Jedi). Dooku’s lightsaber is a beautifully designed weapon that can easily distract the enemy with its stunning aesthetics. Imagine the bearded Count fighting an enemy and the enemy is momentarily distracted by the visually resplendent saber; Dooku uses this opportunity to kill off his opponent.

The dark lord’s attention-grabbing saber is now available to add to your Star Wars collection. StarWarsShop.com has on sale the ‘Count Dooku Stunt Lightsaber Replica’, which is as mesmerizing as the screen version. In fact, stunt replicas are imitation models that are actually used in the film during stunts. There could be nothing more valuable for a Star Wars fanboy than to possess an item that has been used in one of the film franchisees.

The Count Dooku Stunt Lightsaber Replica is a gorgeous imitation model that has a high quality finish to it. The lightsaber has a gentle curve to it, which makes for a snug fit should you choose to wield it in mock combat. The weapon has a glossy metallic finish to it, articulated by embossed lines. The curved center of the lightsaber is punctuated with black handgrips. Red and yellow colored buttons complement the metallic finish of the saber, which adds to the overall look of the Count’s weapon.

StarWarsShop.com is offering the stunt replica of Dooku’s saber along with a handsome black colored plaque on which you can proudly display the Lightsaber Replica. The plaque has the name of the episode, in which the saber was used, inscribed in bright silver. With the Stunt Lightsaber replica, you will surely be the toast among Star Wars fans. One can avail this saber at $99.99.

Star Wars FX Lightsabers and Cool Lightsaber Lamp are other amazing lightsabers that you can plan to purchase for yourself.