Christopher Nolan’s The Dark Knight is said to have singlehandedly changed the landscape of superhero movies. Before Nolan’s urban and realistic portrayal of Batman, the superhero genre was lost in over the top set designs and comedic villains. With The Dark Knight, Nolan ushered in a new age portrayal of a brooding superhero, set against the gritty street settings of Chicago and littered with life like characters that the viewer could identify with.

The Dark Knight set box office records upon its release and may have changed the way superhero movies would be made. Though credit must be given to the director, fans of the nocturnal superhero feel that the iconic superhero movie could not have been made with any other character. Batman’s brooding personality, his extraordinary fighting abilities, and incredible gadgets make the winged crusader one of the coolest superheroes around. 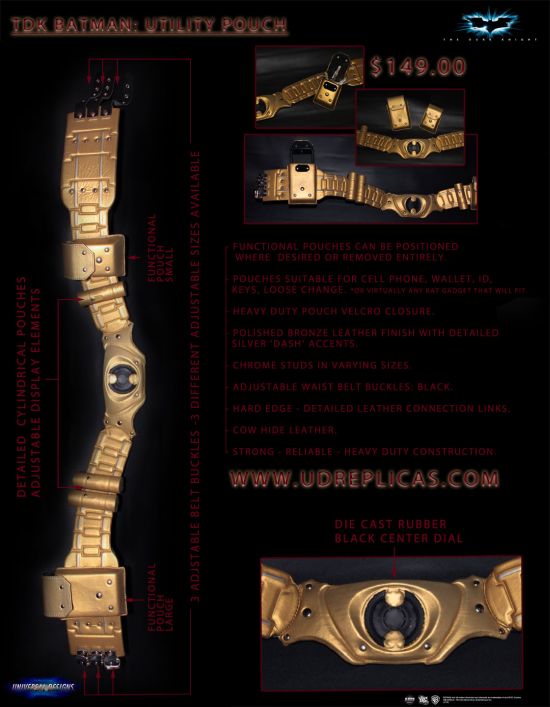 Batman fans can now posses a piece of the incredibly handy gold-colored belt. Universal Designs Ltd. has fashioned an exact replica of Batman’s belt that has appeared in The Dark Knight. The ‘TDK Batman Utility Pouch’ features the amazing functionality of its screen cousin without losing any of the coolness-quotient.

The TDK Pouch is designed from the finest quality cowhide leather with a polished bronze leather finish to match the look of the superhero belt from the movie. Though the belt is created from leather, it has hard edge detailing, which creates the feel of interlinked metal segments.  The center of the pouch sports a die cast rubber dial.

The Pouch features five functional pouches that can be used to carry a variety of things. There are two square-shaped pouches, one to carry your mobile and the other to carry your keys and loose change. There are three cylindrical pouches; let your imagination run wild with what you can carry inside them. All of the five pouches contain sturdy Velcro closures and can be adjusted anywhere on the belt or removed entirely.

If you are a fan of the Dark Knight, the TDK Batman Utility Pouch is a remarkable belt to possess for $149. You can check out the belt at www.udrepicas.com.

If you are a Batman fan, you will also go crazy for Batman Slot Car Race Track Set and Batmobile Cake.