Lernaean Hydra is a seven-headed, ancient water beast that resided in the lake of Lerna. Greek mythology has it that the Hydra was so poisonous; men would simply die if the sea beast breathed on them.Â  Even if men were to cross by the beast when it was asleep, they would die by breathing its tracks. Hercules was given the task of slaying this monster as one of his â€˜Twelve Laborsâ€™.

Lady Gaga is an eclectic pop star who rose to stardom with her debut album, The Fame. She has quite an eccentric taste when it comes to fashion. The Lady has always pushed the envelope with outfits that are bold and sometimes outrageous. 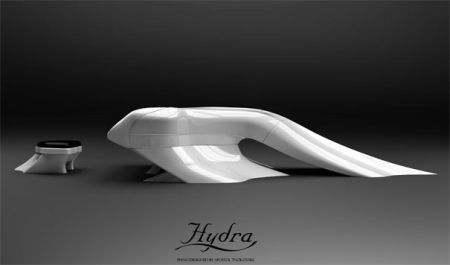 You may be wondering why a Greek mythological beast and an eccentric recording artist are mentioned in the same space. Are they connected somehow? The answer, my fellow readers, is yes. And weâ€™ll tell you how. 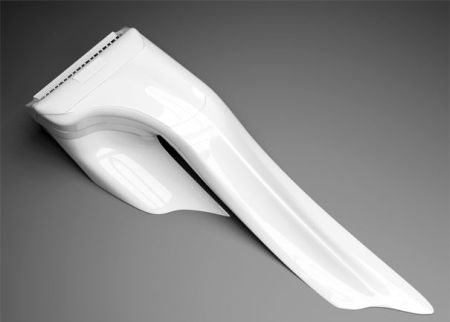 Designer Apostol Tnokovski was watching a Lady Gaga performance on television. If you have watched the pop star perform, you would know that her performances are as eclectic and abstract as her fashion sense.Â  While the designer was watching her perform, something stood out like a sore thumb. The piano on stage was a traditional, square-shaped piece and was a total misfit for the performance. 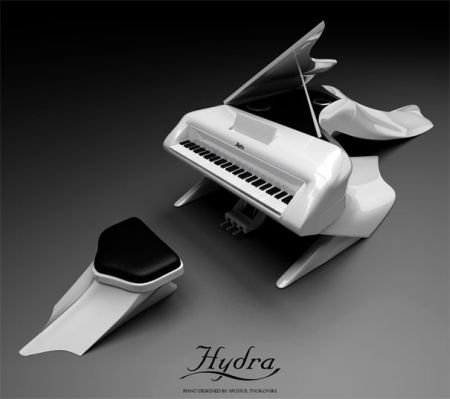 Unable to bear this design flaw, Apostol Tnokovski set out to design a piano piece that would be unique and bold: Just like the singer.

The result, my fellow readers, is a flowing cascading piece of piano design that is simply stunning to look at. The body of the piano is flat to start out with and tapers gracefully towards the end. The legs of the piano also have a curved, fin-like shape to it. Now, this is where Hydra, the monster, comes in. The frame of the piano is inspired by the mythological sea beast. 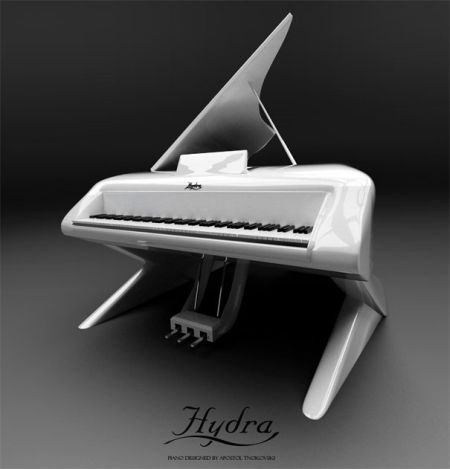 Apostol Tnokovski has designed his abstract piano to resemble the torso and fin of the sea beast. The designer has given due credit to his inspiration by naming the design, Hydra.

The design aesthetic of the Hydra Modern Piano would make even Lady Gaga proud. It boasts of a smooth, supple design with its lines and curves, and is abstract enough to make a bold style statement. The Hydra is accompanied by a bench that is designed in a similar fin-like aesthetic.

The Hydra Modern Piano has been conceptualised to have a marble top finish and will be decked in pure, glossy, white or black.

Look at iTune Juke Box and USB Guitar Flash Drive to learn more about such stuff.