The Knife that Opens Beer Bottles!

The Cicada knife from Columbia River Knife and Tool is the new tool to impress your beer buddies with, while going fishing, camping, or participating in other miscellaneous activities in the great beyond. It’s a small compact oval-shaped knife which will easily fit your jeans pocket, and save you lots of time and trouble. Don’t believe me? Then read on.

Even though this particular knife is no multiple utility swiss knife, it will still make a good company on short trips, and is bound to prove useful for small jobs. The oval-shaped exterior concedes beneath it a 35 mm long high carbon steel pen knife blade on one side, and a pair of small precision scissors on the other. The knife itself seems sturdy enough to do most menial jobs one is bound to encounter on long trips, while the scissors will prove helpful in case you see a pretty plant, and want to chop it off from a particularly thorny bush. Don’t expect to give any stylish haircuts to your dog in case you get bored sitting in the car on the way to Alaska. 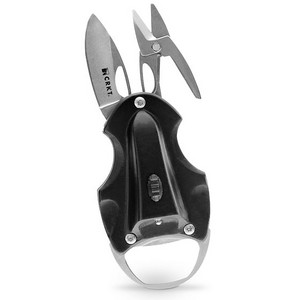 Now the most important part, the bottle opener that comes with the knife. Ever gone on a fishing trip, got that six pack of beer, but forgot the opener at home? Yes, been there, done that. Bottle openers are life savers, and this particular one can be used even when the knife is in a closed position as it forms the bottom part of the knife body. Bless you o’ great knife designer. The handle of the knife is 76 mm long, and the whole unit weighs a mere 57 grams. 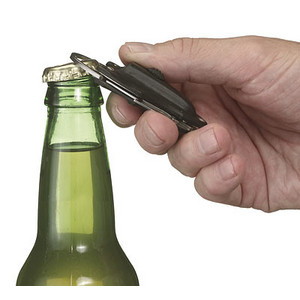 Lastly, there is a bright red LED integrated into the knife, which can be activated via a little button on the side. This in my opinion is a very useful added bonus, and will be supremely useful while camping or even traveling at night and such. The unit boasts a black and silvery sleek finish and will prove to be useful not just to campers or explorers but to all sorts of frequent travelers. Heck, I’ll buy one just to open beer bottles at my next house party! 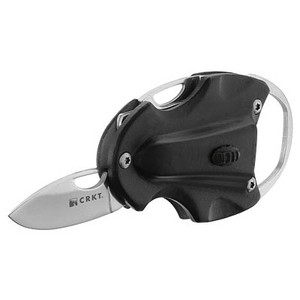