Just when I thought that all the watch designs, cliched and innovative, had been exhausted by various designers and manufacturers, I come across this unique timepiece which I’d like to have the liberty to refer to as the ‘word watch’.

Why word watch? Simply ‘coz it tells the time using words. Well, I know what you are thinking. What is so cool about a watch which writes out the time as “Seven forty-five” instead of “7:45”? Unless it possesses some super cool design, or maybe a few diamonds to make it exclusive, what’s so great about it ? No sir. No fancy shenanigans, or expensive jewelry. As you can see in the picture below, this is as simple as it gets. A black dial with numbers spelled out in light grey, huddled together like lovers on a cold night. 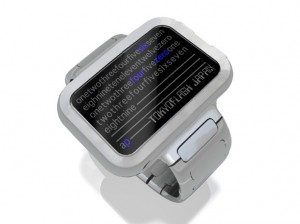 No space between words huh? Actually this is where this watch’s uniqueness shines through. I am not sure what the 14-year old designer Tynan Mayhew had in mind while conceptualizing this Tokyoflash Watch, but I’d like to believe this huddling together of words serves a dual purpose. Firstly, it makes sure that the size of the watch remains compact. Can you imagine how broad it would’ve become if there was even a single space between the words? Probably more like an arm watch than a wrist watch. Secondly, using the close up words makes it tough to read the time, until the corresponding words are lit up. 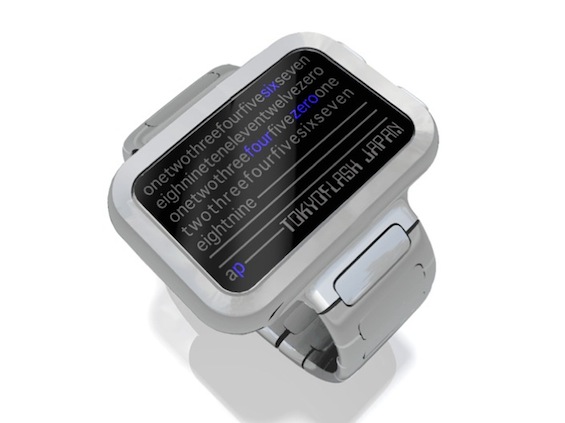 Telling time in a cryptic way is the unique selling point of this device. It simply lights up the words to tell the time. For example, in the image above, it has lit up the word ‘six’ in the first row and the words ‘four’ and ‘zero’ in the second. No words have been lit up beyond that which means that the time is 6:40 and zero seconds. The ‘seconds’ words start from the end of the third row. At the left bottom the alphabet ‘p’ is also lit up. You will see that it’s right next to the alphabet ‘a’. You guessed it right, that is to tell whether the time is am or pm. Since in the image, ‘p’ is lit up, it clearly means that the time is 6:40 PM. Cool or what?

Though it boasts no extra features or cool novelties, I believe this is one cool watch to own, especially if you’re planning to head to a science camp anytime soon.

2 thoughts on “The Word Watch!”