Time Travel with the Doctor Who TARDIS Mug

The primary function of any coffee mug is to safely hold the warm caffeinated drink inside it and provide a direct passage for the caffeine right into the accepting belly of the person drinking it. Imagine a mug that not only holds your precious coffee but also takes you back in time. Imagine a mug that not only takes you back in time but also transforms you into a popular celebrity. Now that would be one amazing coffee mug any connoisseur would love to have.

Entertainmentearth.com has revealed a spanking new ‘Doctor Who Figural TARDIS Mug’ that should put any fantasy regarding time travel and impressing people within hand’s reach. For the uninitiated, TARDIS is the name of a spacecraft that doubles up as a time travel machine that appears in the hugely popular British science fiction series, Dr. Who. In the series, the TARDIS is an invention of an advanced technological race called the Time Lords and resembles a British Police Box. 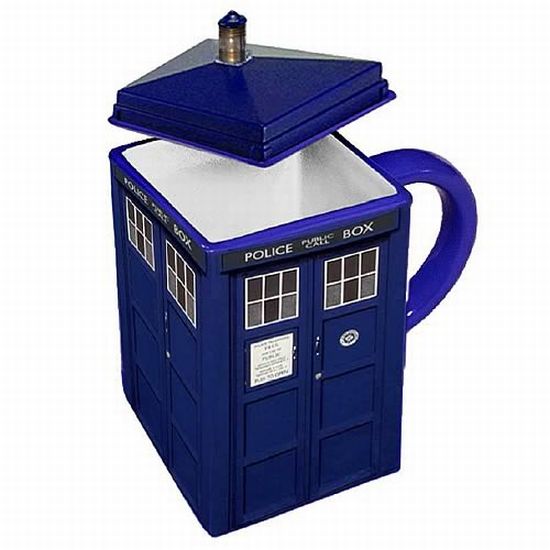 The TARDIS inspired mug released by Entertainmentearth.com also features an advanced level of design work, just likes its namesake from the series. The sci-fi mug is a perfect rectangle in shape and features similar design elements of its screen version.

The body of the TARDIS mug is covered in a deep, rich shade of blue with articulated squares punctuating the mug’s surface. The top end of the rectangular mug is bordered by black plates on which is inscribed in bold white, “Police Box”. In the centre of the plate, you have the words ‘Public Call’ written in a less emphatic style. The windows of the box are designed in black and grey squares on the mug.

The design work on the TARDIS mug reveals a fine eye for detail. Just like the spacecraft and time machine on the show, the Dr. Who inspired mug also sports a square white placard on the right hand panel of the mug. Another impressive detail is the tiny curved handle that sits next to the white placard.

It is imperative that a coffee mug keeps your drink as warm as possible until you have finished it. The TARDIS mug features a cap, which is actually the tapering roof of the police box. The tapering-roof cap fits smuggled over the mouth of the mug and keeps the coffee warm and alive.

The Doctor Who Figural TARDIS Mug is definitely a collector’s item that will appeal to fanboys of the sci-fi show. You can own this at $18.99.

Check out these products too, in case you are looking for amazing designs – Tank Up Coffee Mug and Coffee Mug made from Duct Tape.

2 thoughts on “Time Travel with the Doctor Who TARDIS Mug”