There was a time when a telephone consisted of two pieces, one to hear what the other person said and one to hold against your mouth so that you are heard. Communication has come a long way since then and I must say, most old-timers would actually feel they are living in a science fiction era when they learn about Internet, if they were to be magically transported from the early 20th century. 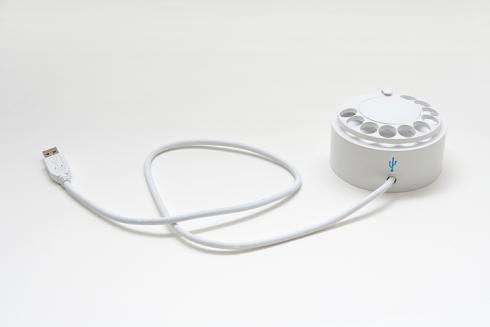 Here is a cool design called the “Dialers and Non Dialers” and it is a USB device as you can see. This purely nostalgic device brings back the days when telephones had dialers with which the older generations dialed numbers. In fact, the word “dial” has no meaning whatsoever today, as we all use touchscreen gadgets and other ultra modern devices.

Thus, this device may be connected through USB and used by those of us who used to actually “dial” numbers for the sake of nostalgic pleasures. Those of us who are too young to have seen a dialer on a phone, this could be a learning experience, much like a practical history lesson. There is no information about its price or availability but it sure is a cool device, and looks quite minimalist and simplistic too.