Fluffy, silver clouds part to reveal a shining, white full moon embedded on a dark blue sky. A pair of feet hurries across the cobbled streets. The feet, covered in sown leather, goes tock-tock as the sound echoes through the empty streets. You can make out they are in a hurry; something is troubling them.

The halo of the full moon falls on the feet and reveals a figure clad in a brown overcoat. The figure hurries trying to escape the moonlight. As the figure quickens its pace, some kind of a transformation seems to be occurring. Hair begins to sprout on the figure’s hand and the nails lengthen into claws. The face darkens with the eyes turning yellow and the forehead turning into a mane. You can hear the rhyme of the gypsies whisper about: Even a man…may become a wolf when…the autumn moon is bright. 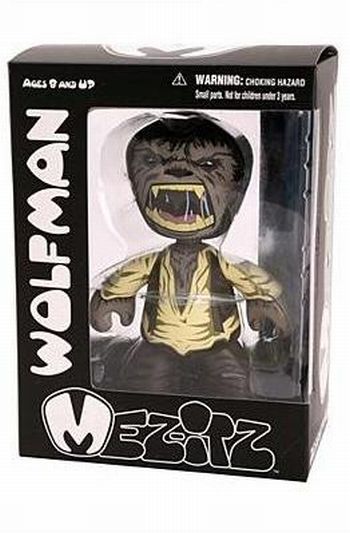 The transformation is now complete. A dark hairy figure, slightly hunched, looks at the full moon and lets out a howl: This is the Wolf man. The Wolf man myth has fascinates us for centuries. Hollywood has played its part too. 1941’s The Wolf Man captured the public imagination with Lon Chaney Jr. playing the tragic character of a man who turns into a wolf.

The Wolf Man was remade this year and the brooding Benicio Del Toro reprised the role of Lawrence Talbot. With the Wolf man myth fresh in public memory, Mezco Toyz has launched a Wolfman Mez-Itz action figure for fans of the Wolfman. 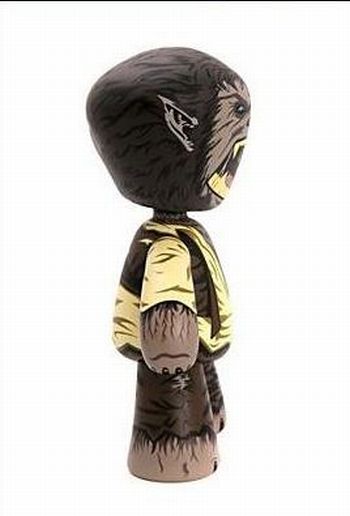 The vinyl-figure Wolfman is as ferocious as its screen version with its terrifying fangs, furry mane, wolf pointed ears, and clawed hind paws. The face is locked in an eternal growl with its fangs ready to tear into anyone or anything.

People behind the Wolfman action figure have modeled the toy to resemble the creature design, by Academy Award Winner Rick Baker, that features in the 2010 Wolf Man remake. The toy features the characteristic dark, wolf skin covered by sprouting hair; the ripped shirt and pants; and small tiny eyes glowing with animal rage. 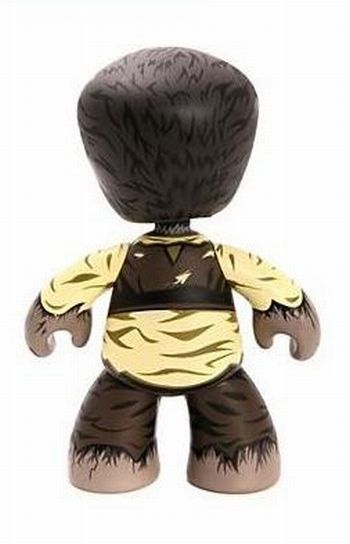 Standing at six inches with six points of articulation, this Mez-Itz Wolfman is definitely a treat to look at. The Wolf man may not have the same ‘boyish’ appeal of a superhero or a Star Wars character. And that is exactly the selling point of the Wolf Man Mez-Itz: Only a true bad-ass can possess it at $16.99

Looking at this toy, i am sure you would also want to possess Darth Vader Action Figure and Boba Fett Keychain Figure.