If you have always been using Apple products, you would know that they used to sell a series of personal computers between 1999 and 2004 called the Power Mac G4. 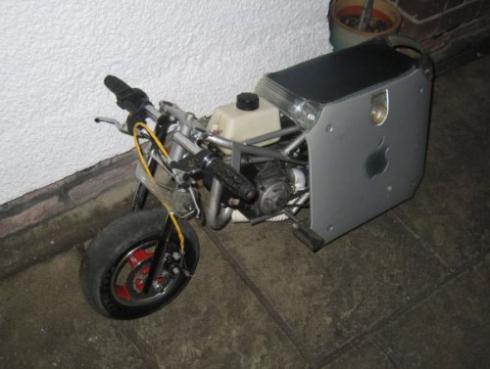 While they may have stopped this computer’s production, that does not seem to stop people from continuing to love the Power Mac G4 any less. Here is a cool new power Mac G4 mod that has been converted into a motorcycle seat. The motorcycle looks like a toy but if you are going to use a power Mac G4 as the seat, you cannot really expect the bike to be really large.

Nevertheless, it is a cool mod that shows how indispensable Power Mac G4 was, sometime back. The bike certainly has to be a kid’s bike, and if you would like to get one for a kid in the house, I am sure you could build one yourself. It certainly won’t be the most comfortable seat for a child to sit in, but it surely would be one of the most enjoyable.

This could even be a great way to teach your children or younger siblings about the history of computers, by modding their bikes and toys with computer cases from a different era. You can also check out the Lego PC case Mod which we wrote about sometime back. The Steampunk PS3 Mod would appeal to those who are majorly into gaming.