Batfans gear up, ‘coz yet another Batman merchandise is up for grabs, and mind you, this one is surely gonna blow you off the tracks. Presenting the Batman Race Track Set, a slot car race track showcasing the hit 1966 Batman TV series wherein the world’s favorite dynamic duo and the Joker are in a fatal kill-all-the-way race to the finish line. 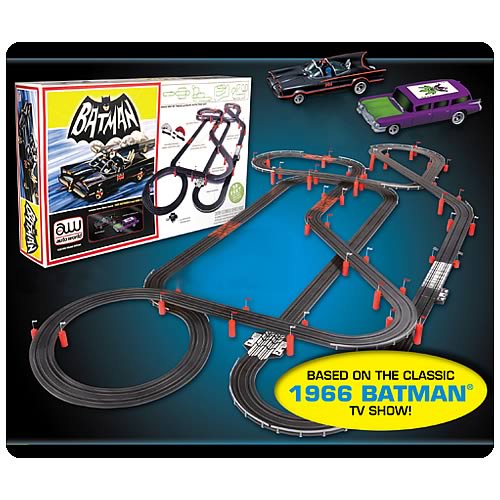 This cool old school toy has 49 feet of tracks which can be laid out in 5 different ways to enjoy some hardcore action in catching the dreaded Joker; and on the way coming across some dynamic lane changing, over and under racing, squeezing through single tracks, and dodging the fatal crash barriers. The mint pack includes the Batmobile with figurines of the Batman and Robin, and the Joker’s classic 1959 Cadillac goon car. The variable range speed controllers add thrill to the home race.

Available for a price of about $133, this thing for sure can’t be classified as being dirt cheap, but dedicated and freak fanatics like me would mind even breaking open our budget cut piggy banks for this stuff. Batman fans could spare a few minutes, and take a look at this rather fancy Batman Hoodie, and the complete foodies could well, do even with the Batman and batmobile cake, what say?