Meet The Boxing Robots and Have Fun Fighting

Boxing is something which has always been closed to me since childhood and wherever there is boxing, you will find me there for sure. If you think that boxing is just for an unsophisticated bunch of people who love to create fights then you are totally wrong. Boxing is a sport which is for people who have courage in their hearts and brain in their heads. That’s the reason I love it so much and for all those boxing fans out there, here is the perfect gift they can get. This is “The Robotic Pugilists” who are the boxing starts of the robotic world. 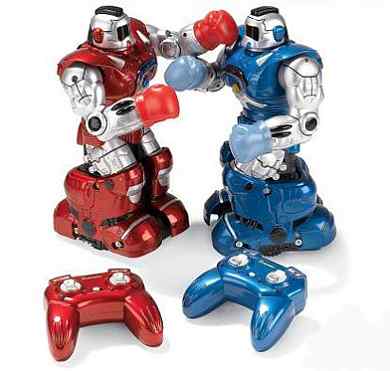 Robotic Pugilists are the results of a killer concept with the use of the perfect technology. First we will go to the looks and I must say, some awesome color combinations have been given to them. Especially the remote control looks killer with their respective metallic colors. The robots look even cooler with their Mohawk hair style. Now about their functionality which has been proved to be terrific. As a boxer has to be alert while slipping and jabbing whenever getting a chance, this one has been made by keeping everything in mind. Yes, it can bob while throwing hooks, jabs, uppercuts depending on the players command.

The boxers have also been enabled to respond with audible objections and whenever it gets punched, it makes one of the three facial expressions while the speakers roar out the voice of crowd whenever a haymaker is landed.

This one also provides a single boxer to improve its punching skills in training mode while many boxers come together, a big robotic world championship can be organized. This killer toy comes with a price tag of $59.95

while it can be hazardous for kids below 6, so be careful.

You can see some more cool toys like Robotic Hammerhead Shark and Transformer Megatron Bust , which you will like too.

One thought on “Meet The Boxing Robots and Have Fun Fighting”