As we age, our hair turns into shades of grey, our skin begins to wrinkle softly, our reflexes slow down, and our body functions become less efficient. Aging affects our eyes too, especially the ability to focus on objects. Presbyopia is an eye condition that occurs in old age when the eye loses its ability to focus on objects at a short distance.

Yuexun Chen, a designer based in Taiwan, has designed a chic looking solution for the eye condition that can be carried around in one’s pocket. Titled PEG, the design concept offers people afflicted with Presbyopia the luxury of carrying their corrective lenses in their pockets instead of carrying it around in a protective case. 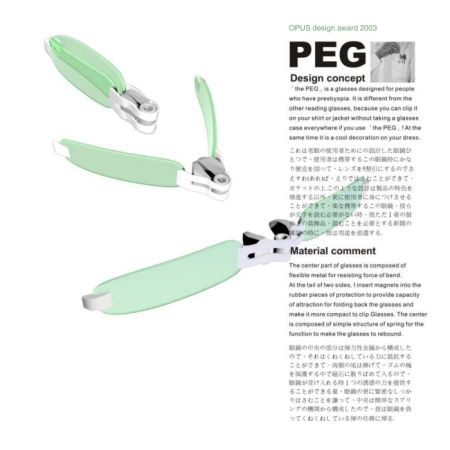 The exact reason why Presbyopia occurs is still not known. Medical research suggests that due to the loss of elasticity of the crystalline lens, the ability of the eye to focus on nearby objects diminish. The eye condition could also occur as a natural side effect of an aging human body.

Chen’s PEG corrective lens concept is based on simplicity. The central bridge, which rests on the nose, is made from a flexible material. It acts as the protector of the spectacle by absorbing any external force exerted on it. The bridge’s structure is inspired by a spring, which allows the user to coil (close) and uncoil (open) the spectacle as they please.

The lens of the PEG, its most important part, extends from the bridge and tails off at the end of the eyebrow. A pair of protective rubber pads, installed at the ends of the corrective lens, grips the PEG to the eyes. The rubber pads have magnets that allow it to clip (or be folded back) to the other end.

This is all there is to the PEG. No additional frames or sides, just the bridge and the corrective lens.

The minimalist aesthetic of the PEG makes it very attractive to look at, while maintaining a discreet appearance. The spectacle’s designer aesthetic means that it can be taken to parties and outings without sticking out like a sore thumb.   Since the PEG is based on a simple easy to use design, it is a perfect choice for the elderly to overcome their eye condition without having to undergo a surgical procedure.

Because of its beauty and functionality, the PEG design concept was awarded the OPUS design award in 2003.

If this has caught your attention, I’m sure you will also go crazy for products such as Bombay Sapphire Tornado and Braille Ball Design.