If there is one thing that Science Fiction fans are thankful for importing from the United Kingdom, it would have to be Dr. Who. In that vein, you can have your very own Doctor Who Sonic Screwdriver Ink Pen, which you will undoubtedly need on your next trip through the time space continuum. or if you happen to have any paperwork to get through, I guess it can help with that as well. 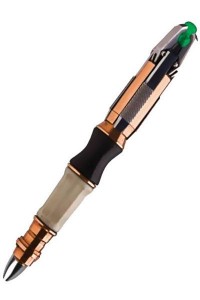 The pen is based on the eleventh Doctor’s sonic screwdriver, and the gadget is a top notch executive pen. It also comes with two separate color cartridges: Black and Green. All you will need to do is twist one way if youw ould prefer black and the other way for green. Other versions of the pen that I have seen included lights or some time-traveling sounds, but this particular sonic pen likes to keep it simple. The price is about what you would expect to pay or a pen of this caliber, clocking in at $22.49. It won’t exactly break your bank, whether it is in the future or the past. Despite the name, however, don’t expect any sonic screwdriver power. It really is just a pen, after all.

If you are looking for some other devices from the future, I think can we can indulge you. Being able to jump start your car even when it is 10 below zero outside counts as Science Fiction, to me. Well you can do just that with the Glove Box Battery Jumper. The future will also undoubtedly have a wide variety of electronic devices, so make sure you can control them all with the RedEye Mini Remote, which can conveniently attach to an iPhone, iPad, or iPod touch.

One thought on “Doctor Who Sonic Screwdriver Ink Pen”