One of the reasons why the video game industry is so successful is because gaming is an immediate stress reliever. Playing combat games, First Person Shooter, or strategy games helps one to focus on the moment and forget everything else for a while. For people who like a little bit of movement, new age consoles like the Nintendo Wii allow gamers to play the game by using dynamic movement. Gaming is an effective stress buster, but there are times when you may feel you need a little more ‘life-like’ action. For those of us who would prefer to physically jostle with a friend or a sparring partner rather than kill mindless zombies on a gaming screen, the Duel Combat inflatable combat game is the perfect thing to try out. 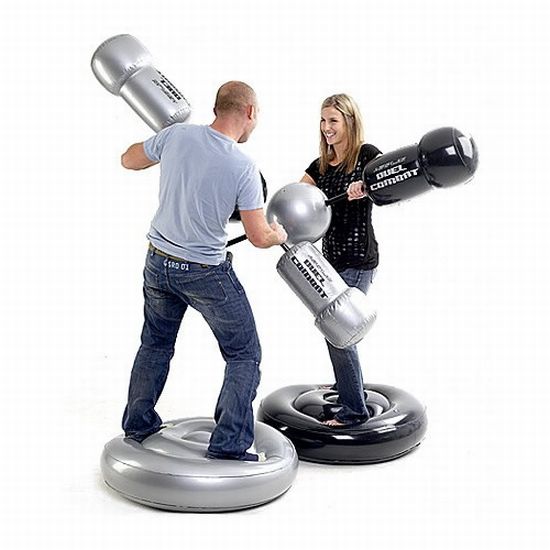 Duel Combat allows you to battle physically another person in a harmless, fun way. You could push, shove, and hit each other in a way that would cause absolutely no harm to either party, and still feel a sense of exhilaration and an adrenaline rush. The inflatable combat game contains two inflatable podiums (one in black and one in grey) and two inflatable batons (having the same color tone as the podiums).

To play the game, you and your jostling partner need to climb on top of your respective inflatable podiums with the two inflatable batons in your hands. You would need to steady yourself on the inflatable podium before you can look your mock opponent in the eye and prepare to battle. The inflatable batons are used to hit the opponent in such a way that they lose balance and fall off the podium. The batons are designed in such a way that even if you hit your opponent with full force they would not have any sort of scarring.

Duel Combat is an ideal game that can be set up in your garden and played in the open air. It would make for great family entertainment or even for a fun workout session with your mates. Since the game requires to be physically alert, it can double as de-stressing form of exercise as well.

If you need to decide who gets to do the laundry, or date the hottie next door, Duel Combat will decide it for you in a fair and square manner. The inflatable combat game retails for close to £29.95, which is a bargain considering all the fun you are going to have. So, get set and get ready to duel with the inflatable Duel Combat.

I think more than children, grown-ups would find it interesting! If you are game for it, take a look at Geospace Jumparoo Anti-Gravity Pogo and Chrome Ping Pong Table.

2 thoughts on “Duel Combat – A Fun Way to De-stress”