It was when a realization struck about papers being of perishable nature that the idea of invention of scanners developed. This was due to the difficulty that was experienced in maintaining important documents and papers owing to their nature. A path breaking invention in the early 20th century, that of scanners, definitely beat the means used to transfer images, the telephotography using telephone lines. Drum copiers were the first kind of scanners that used photomultiplier tubes to capture the data. These minds are still in use as captured images are of very high quality, and are quite expensive. Besides this, small scanners that could be held by the hand were popular in the 1990s, which when moved over the page brought out colorless impressions of the same. Then came into being, the flatbed scanner at affordable prices, in which a glass sheet was fixed over the optical reader and documents that needed to be scanned were placed on top of this glass. The quality of the outputted image increased and also these scanners could capture colored images. Scanners were also developed for the blind which read printed text and converted the same into speech. 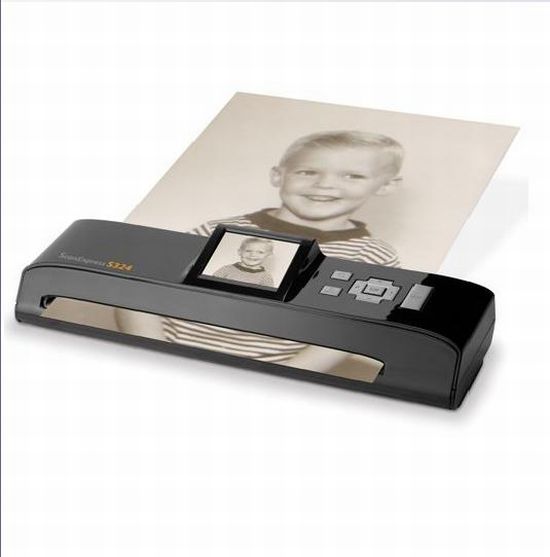 Shortly scanners became one of the common objects in most households, since one could scan and email photographs and other messages even at long distances. Scanners used for the purpose of capturing photos were popular until the invention of digital cameras. But even today, in spite of existence of such cameras, scanners have retained their popularity. Moreover, the advancement of technology has been utilized and these days one can own a portable scanner that can be easily carried around to wherever one is travelling.

But would it not be great if one could preview the image before scanning? Well, Hammacher Schlemmer has done it again by bringing out The Only Previewing Full Page Portable Scanner. It has come to be the world’s only portable scanner that can acknowledge a full page and give a foretaste of the text or image. The scanner has an in built color LCD screen of 2.4”, through which one would be able to preview the image before saving the data in a digital format.

The screen provides an image at a resolution of 480×234 pixels. 8 ½” x 11” sized documents are accepted in full and also even 3” x 5” sized photographs, and scans them into images of 300 dpi resolution. The scanned images are saved in the form of a JPEG file into an SD or MMC memory card. Memory cards formats of up to 32 GB are accepted (where about 875 images can be stored in a 4 GB SD card). The images thus stored in the card can be transferred into a computer of OS XP, Vista, or Windows 7, using the small USB cable that is included in the package. The package also includes software that helps in converting the scanned documents into PDF, Word, or Excel files and an AC adapter that powers the scanner. At a price of $169.95

, the scanner comes with a lifetime guarantee.

This is truly amazing! But in my opinion you also need to check out CopyCat Portable Scanner, which looks just too smart.

One thought on “The Only Previewing Full Page Portable Scanner”