This tool reminds me of that story where a doctor in Africa, once caught in an emergency, performed a surgery using a Swiss knife. He would’ve been sure glad to have this around.This is the ultimate Swiss knife to have. Even if you don’t spend a lot of time in the wild or are preparing to fight at the borderline, this little knife somehow makes your life feel complete. 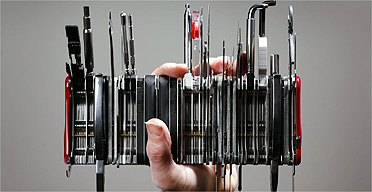 At first look this appears to be something that would come handy in a bar fight (like a wrench) but Weighing at almost a kilogram this knife possibly has everything a man could expect from a Swiss knife. It integrates 87 tools and offers 141 functions in all. Ranging from a nail file and a corkscrew to more obscure ones like a Golf club face cleaner and even a toothpick. While it may seem daunting to try and figure out which tool to use or rather what function a certain tool performs, this is simply a must have for enthusiasts and collectors.

Made in Switzerland, by Wenger,  one of the only two genuine Swiss knife makers, this 9-inch long knife is assembled by hand. I can imagine the plight of the man in charge of doing this tedious job trying to keep up with all the market demand. Though the whole idea and the look seems ridiculous and chances are slim that one person will need to use all 87 tools in a lifetime, most of these tools are rather useful. Whether it’s the smartly crafted magnifying glass (reminds me of this pocket microscope) or the laser pointer with a 300 ft range. 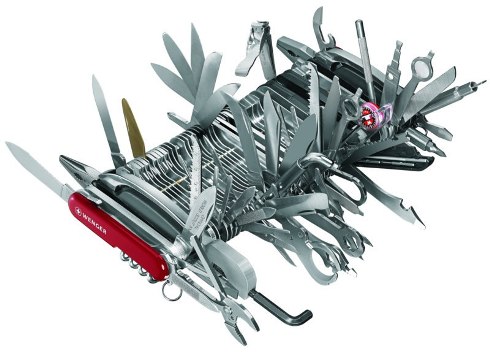 The regular tools are present in numbers too. Variation of Phillips screwdrivers, flat head screwdrivers, blades, saws, openers, tweezers, cutters, and a few golf tools. Golf tools? Yes, sir! I’d take up the membership to a golf course just to use the Golf shoe spike wrench and the Golf divot repair tool. Give this knife to a man and he will have a toy to play with for a month to go. Though that might mean a lot of disassembled objects and cut up wires all over the household.

To summarize, this is a must have not just for collectors but also for those of us fearing alien invasion. For the major fans, you could get your hand on this Bad boy for £499.99