Writers used to be very productive back in the day, creating novel after novel and putting pen to paper on a regular basis. With the invention of social networks and time-wasting sites, much of that productivity went away. The Hemingwrite mechanical keyboard looks to reverse all that.

It’s almost a certainty that some of humanity’s greatest literary achievements wouldn’t have existed if writers were given access to Facebook, Twitter, MMORPGs or the Internet, as a whole. Sure, disconnecting from the Wi-Fi network or unplugging the Ethernet cable might work for a short while, but in the long term, the temptation is still there. Hemingwrite is a mechanical keyboard designed to look like a typewriter (these retro keyboards seem to have taken off recently) that puts everything you write on an e-Ink display. 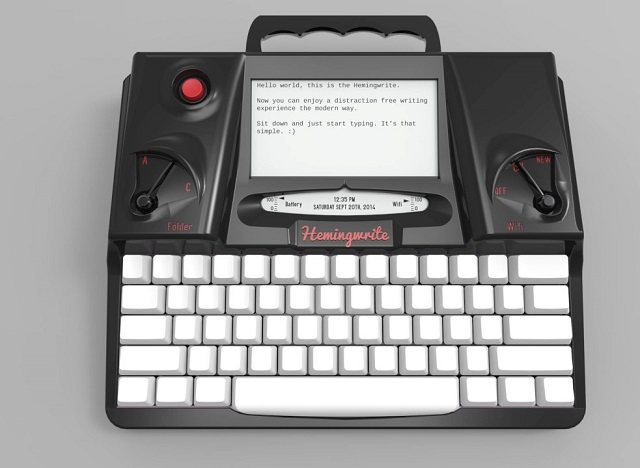 Hamtramck, Michigan-based cofounder Patrick Paul pointed out that “What the Kindle did for reading, we want to do for writing. Adam and I are huge fans of the simplicity of a typewriter but using one is tiresome and outdated. We set out to deliver the same distraction-free writing experience of a typewriter with all of the added benefits of modern technology: backups to the cloud, e-paper display, Cherry MX keyboard switches — and nothing else.”

That’s right, everything you type on the Hemingwrite e-Ink keyboard gets uploaded to Evernote or Google Docs via a Wi-Fi connection, so your text is safe even if your battery runs out unexpectedly. Speaking of batteries, the included one should keep you up and typing for more than 6 weeks. That’s really no surprise, as the 6″ backlit e-Ink display (which is really as big as the Kindle’s) isn’t that much of an energy consumer.

Just so you know, there’s room for all of your words on the Hemingwrite. It can store more than 1 million pages, which would take a terribly long time to write.

Cofounder Adam Leeb added that “I think what we created with our prototype is the best possible writing experience. We combined all of the best aspects of the typewriter, the moleskin, and the computer to create a modern classic.”

Anyone shouting “Shut up and take my money!” will just have to wait some more, as the Hamingwrite is still in the development phase, so the price is yet to be announced.