Guitars have been the cornerstone of the rock star image.  Jimi Hendrix, Bob Dylan, John Lennon; you cannot imagine any of these rock and music gods without a guitar in their hands. And they sure knew how to play it. A guitar never sounded sweeter when played by these super talented musicians.

A lot of us like to learn the guitar and be a rock star, even if it is just for a few seconds and in front of our friends. There is something eternally cool about a six string that probably cannot be articulated. Most of us, however, give up learning the guitar due to lack of time or due to the amount of practice it takes to master the strings. 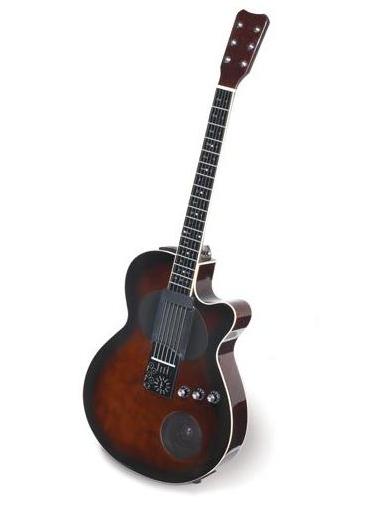 Quality retailers, Hammacher Schlemmer, has a simple solution for those of us who wish to pick up a six string and be an instant rock star. The ‘Instant Impresario Guitar’ allows you to make an instant impression without devoting a lot of time to know how a D or C chord is played. The guitar allows the user to master the basics in easy learning steps.

It is shaped like an acoustic guitar with a hollow body shape and a rich wooden texture. The six strings are strummed across the wooden body and attached to a touch sensitive pad. Below the touch sensitive pad is a 1 1/2-watt speaker that is built into the wooden frame of the guitar and produces notes, sounds, and chords in crystal clarity.

The fingerboard of most guitars would include frets and notations of key chords. The Instant Impresario from Hammacher Schlemmer has a fingerboard that has all the basic chords present on it in the form of buttons. If you press a particular chord button, that note will be sounded on the guitar’s speaker. 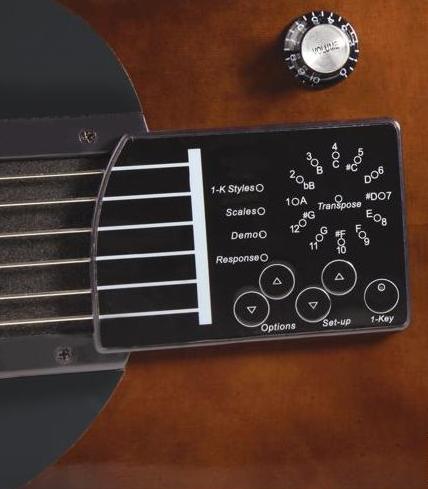 The user can play up to 24 different chord combinations just by pressing the buttons. Touch sensitive pads on the base of the guitar allow for high degree of individual string control. Controls on the pad include 1-key styles, scales, demo, and response buttons that include volume, bass, and treble.

To play a song on the automatic guitar, all you have to do is press the particular chord buttons with the left hand. The notes will sound out on the inbuilt speaker. Since the chord buttons are articulated on the Instant Impresario Guitar, your favorite tunes can be played instantly and you can impress your friends and family with your rock star like talent. It is available at $599.95

If you like to play the guitar, get musical by wearing Musical Shirt and try playing this amusing Guitar Flash Drive.