Iron Man 2 had Robert Downey JR. reprising the role of the flamboyant Tony Stark with a host of new characters such as Nick Fury, the sensuous Natalie Rushman, and Ivan Vanko who is the villain of the piece.

The film also had Tony Stark wearing three, brand new, Iron Man suits. The Mark IV was developed in the six months between the timeline of the two move sequels. Mark IV is more angular, has a different color scheme, fits closer to the body, and is more aerodynamic. 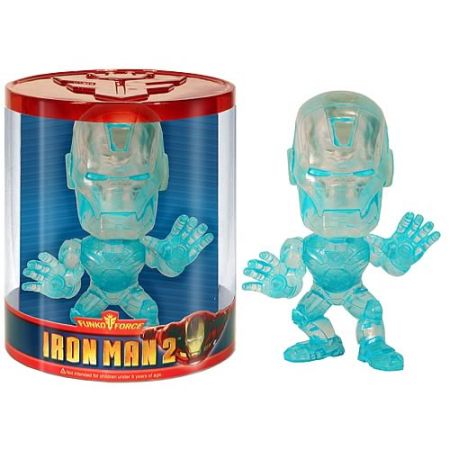 Mark V is Iron Man in a suitcase. The suit was developed to be used in an emergency where Tony did not have access to the Iron Man suit. In Iron Man 2, the Mark V comes in handy when Ivan Vanko unleashes a surprise assault on Tony.

One of the highlights of the movie was Tony Stark donning the Mark VI suit: the most advanced of the three suits. Based on the Mark III and IV platforms, Mark VI is highly resistant in extreme combat conditions and can withstand intensive attacks with the suit suffering only minor damages. The Mark VI is faster, is more responsive in flight, and has a lethal arsenal that consists of a grenade launcher and a laser weapon that can cut any metal (or villain) in half.

To mark the awesome Mark VI Armor used in Iron Man 2, the guys at Funko Force have come up with a holographic Iron Man action figure wearing the Mark VI.

The ‘Iron Man 2 Holographic Iron Man Funko Force Bobble Head’ stands proudly at 5 1/2 inches ready to blast villains into outer space. Since the action figure represents the holographic function of the Mark VI, the toy has a transparent, blue finish. The aerodynamic lines of the suit are represented on the toy in the form of articulated lines. The triangular chest plate, the HUD, and the arc-reactor beams on the palms are highlighted with a blue tone.

The head of the Iron Man 2 action figure is magnified in size when compared to the rest of its body, which makes it simple adorable (and not in a girly kinda way).

The ‘Iron Man 2 Holographic Iron Man Funko Force Bobble Head’ with its distinctive transparent finish is definitely an item that Iron Man fanboys would love to show off to their peers. The action figure is available online and is priced at $13.99.

If you are looking for some new designs, then you must check out Darth Vader Figure and Boxing Robots.