Storing your video collection in a digital format is obviously far more convenient than having to look through tens of Blu-Ray and DVD discs when you’re in the mood for a movie night.

Kaleidescape Cinema One is able to rip both these types of discs and store their digital copies on a 4TB hard drive. For DVDs, that’s really a whole lot of storage space. For Blu-Ray discs, though… not so much. In the process of ripping the discs, Cinema One gets rid of a lot of unneeded things, so what you’re left with is the movie and nothing else. In other words, there’ll be no FBI warning, no disc menu and no trailers for other flicks. By doing so, Kaleidascape’s movie house manages to save a lot of space. As a result, the Cinema One is able to store up to 600 DVDs or 100 Blu-Rays.

The manufacturers made sure that the Cinema One looks and works great out of the box. There are all the connectors you could ever need in this day and age: HDMI for video and audio signal, analog and coax ports for audio, an USB port for external storage and an RJ45 port for Ethernet connections.

Booting it up takes around 10 seconds, so it’ll take more to make the popcorn. The interface is easy to navigate through, and launching a movie is extremely easy as long as you keep the physical copy of the disc in the player. That’s Kaleidascape’s way of protecting itself against accusations of storing copyright-infringing material. 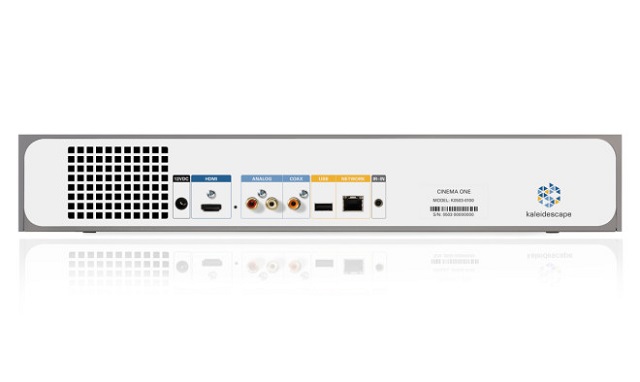 Cinema One is not without downsides, however. At some point you’ll realize that 4TB isn’t exactly enough storage. Secondly, this unit costs $4,000, so not a whole lot of people will be able to afford one. At such a steep price, it’s obvious the Cinema One was made to sit in a luxurious living room of snob men. You would expect to be able to put physical discs away after ripping them, but you end up looking for them anyway, cause without one you’re not able to play the movie. Speaking of ripping, in case of DVDs, the player is done in 20 minutes (decent, even though it’s possible to do it faster), but if you want to rip Blu-Rays, you need to wait 4 hours. Netflix, Amazon, Hulu are a far better deal than this, and not only because they’re cheaper.