Six wooden kegs, arranged like a pyramid, sit on a computer desk. Three miniature kegs form the base; two kegs form the first row, while a single keg sits at the top.

The kegs have a warm, wooden finish to them with delicate circular carvings that one would find on a life sized wooden keg.

A narrow, rectangular contraption comes into focus on the same computer desk; it is pointed directly at the six wooden kegs.  At first glance, it looks like a lab apparatus from a physics lab. A hand slowly enters the frame with a tear shaped metallic ball hanging dearly from a fingertip. The hand pauses for a moment, almost as if taking aim, and then releases the ball into the contraption. In half a heartbeat, another ball shoots out from the end of the contraption with lightning speed and crashes into the wooden kegs, dismantling them. 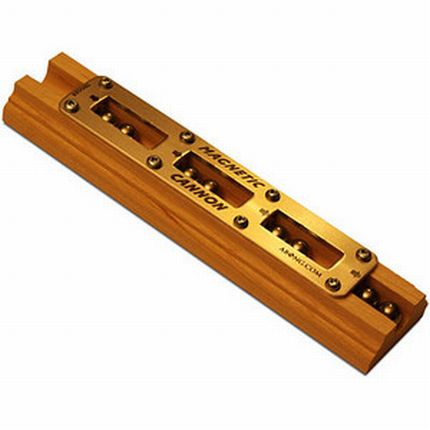 The narrow contraption is a wood-finished ‘Magnetic Accelerator Cannon’ from the fresh minds at ThinkGeek. The magnetic cannon has a narrow, straight shaped wooden body with a three-chamber steel railing fixed on the wooden body by seven silver screws. The words ‘Magnetic Cannon’ are imprinted, in bold, on the railing in black. Two metallic balls are contained in each of the three chambers of the cannon. 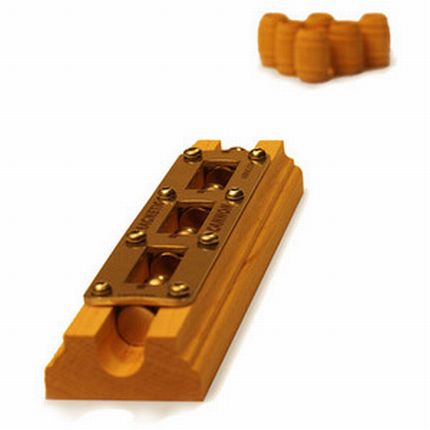 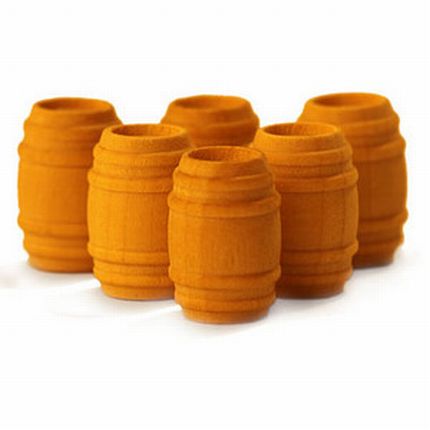 To put it simply, due to the magnetic nature of the balls, energy is transferred, while multiplying, from one ball to the other. 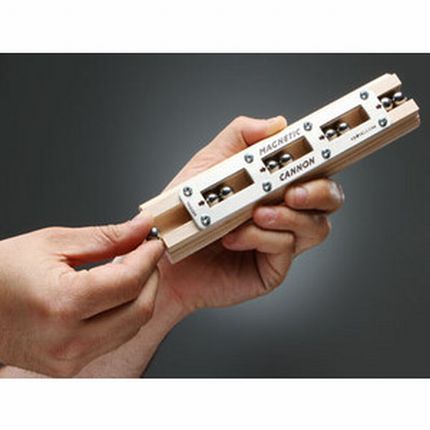 The Magnetic Accelerator Cannon is a very handy device that can be used to impress the audience at science fairs, or can be used to shoot kegs off your office table – a great way to pass time. The cannon comes fully assembled with a maple body and a steel clamping plate. The package includes 10 metal balls, a loading tool, 6 kegs, and instructions on how to use it.

With its boyish-fun quotient, ThinkGeek’s Magnetic Accelerator Cannon should appeal to geeks and non-geeks alike.  It is available at $29.99

Magnet Bottle Opener and Magnetic Bucky Balls are few other similar products that might interest you.