A grey ball sits on a completely white background. Next to the ball, a two-legged robot stands, closely observing the circular object.

With a gentle jerk of its knees, the robot moves closer to the ball and positions itself right on top of it. The right leg of the robot arches back followed by a forceful thrust ahead. Its right foot connects with the ball and sends it flying out of the frame.

The two-legged robot is not one of the Honda-designed robots that you may have glimpsed on TV or on YouTube that kicks the ball around. This robot is a 3D character design called the MiniWalker. 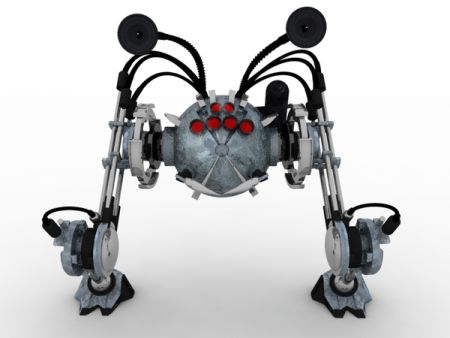 The MiniWalker was conceived by the vivid imagination of James Kearsley, a motion graphics designer and owner of JK Studios. James Kearsley’s work has appeared on channels such as MTV, BBC, and Virgin.

The design aesthetic of the MiniWalker features traditional motifs of robot design. There are pumps, gears, levers, LED eyes, and a metal based finish. The look of the 3D robot is based closely on the neighborhood spider, but probably not the friendly variety.

A circular dome forms the head of the robot. Its shoulders are formed by large, circular gears that connect the head to the long legs of the virtual robot. The long legs of the robot are divided in two parts: an upper leg that is made up of three shafts, and a lower foot that is made up of a shock-absorbing lever. The lower foot is connected to the upper leg by a circular valve joint.

The reason why we say that the MiniWalker resembles a spider is because of its dome-shaped head design. From the top of its head arise two, black tentacles shaped in form of music speakers. Six, red LED eyes are arranged in two layers on the head; four big eyes are placed below two small eyes. Near the imagined mouth of the robot are two sharp fangs that can move at a quick tempo.

James Kearsley got an opportunity to design the MiniWalker for a short film entitled, The Initiation of Kim Sun. The movie is about a greenhorn Korean financial analyst who discovers that the successful London hedge fund he has joined is not what it seems. The MiniWalker visual effect sequence in the movie earned James a nominee for the 2008 Escape Awards.

The creative design, and life-like rendering of the MiniWalker, reflects the fine talent of the designer.

Robby and Boxing Robots are few other products that are likely to grab your attention.

One thought on “MiniWalker – A 3D Robot”