A UK based company HaloIPT which is owned by New Zealand based Auckland UniServices and Ov Arup & Partners, has come up with a novel idea by designing a wireless EV charging system. 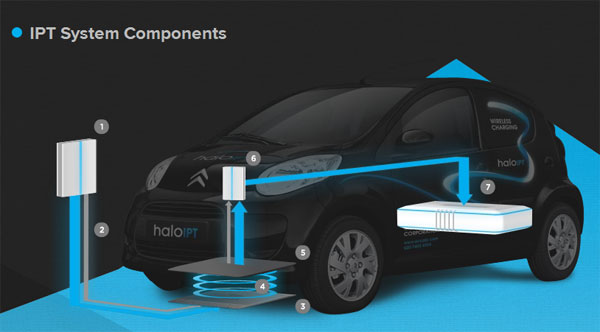 One of the best advantages of using this wireless charging system is that it can easily be embedded underground in parking lots and streets. Through wireless charging, electric cars can easily travel anywhere you want and when you want.  In this system, magnetic fields are used in place of cables or brushes in an effort to induce electricity.

According to its creators, the technology used in this venture has a huge potential as charging inductors can easily be installed on streets. In this technology, EVs can recharge as parallel parked or while waiting for the stoplight to turn green. With the assistance of this system special EV charging lanes can be setup anywhere like highways and roads also, thus cars can be recharged while moving. This novel technology will be showcased in London throughout November.  If the venture remains successful, it will definitely solve the range limitations of EVs.

One of the main disadvantages of these electric vehicles due to range limitation is that most of the EVs available today needs to be plugged into regular AC wall outlets, but what will happen if you intend to go on for a long ride is a point to ponder?

Yet another problem you might face is having forgotten to plug in your EV, which needs at least eight hours to charge up. One solution to this problem could be if wireless charging is introduced. No doubt IPT, a company is on the verge of introducing a new wireless inductive power transfer system for EVs that can help in shooting off power over gaps of up to 400 mm which will  help the driver to pull into the garage charging pad and the car can get charged up.  Officially, the commercial scale demo of the IPT tech can be achieved during 2012. Other designs you may like to appreciate include  Herb Intersceptor : An Extraordinary Future Car and Null – The Mobile App Car Concept.