We are tired of Ferraris and Lamborghinis, aren’t we? We need something new but the question here is, can this car, known as Null, be the next big thing? It looks like the VW Beetle to a certain extent which was a major hit so can this one make it up to the mark as well or like most of the designer cars it will be lost somewhere in the blogosphere. 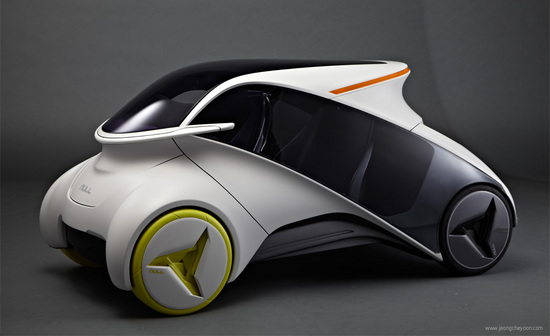 Well, we can’t really say that it’s a superb car but what we can say is that for sure it is one unique concept.

First and the foremost, Null is an electric car which is all the rage these days. The good part about being an electric car is that it saves natural resources but the bad part is that well, it is going to be slow like a sloth! The fastest electric car I have reviewed so far could only go up to 90 km/h. That for sure is a disappointment and considering that this car wants to jump into the sports car scene, we are afraid it will not be able to grab the attention of consumers.

But, there is something else about this car as well which makes it unique – the overall design of this car has been inspired from CELLPHONES. Yes, you read it right…’inspired by cellphones’. The rear dock area of the car is meant to serve as a port for applications that can be created or the bike. Not only this, the car has been designed beautifully but there are certain areas which Jeongche Yoon needs to redesign maybe. I am not a car designer but with no offense intended, certain areas of the car doesn’t make it look like a ‘car’. If the whole idea here is to make it look like a spacecraft then it’s fine or else the car needs a bit of redesigning. For instance, I don’t see the doors anywhere and the sides of the car don’t really seem to be allowing people to get in and out of the car easily. I have checked the video as well and there was nothing about the doors. So, I am a bit skeptical about whether this car is really a car or something else!

Check out some more car concepts here: ELPH and The Audi IceKraft.

One thought on “Null – The Mobile App Car Concept”